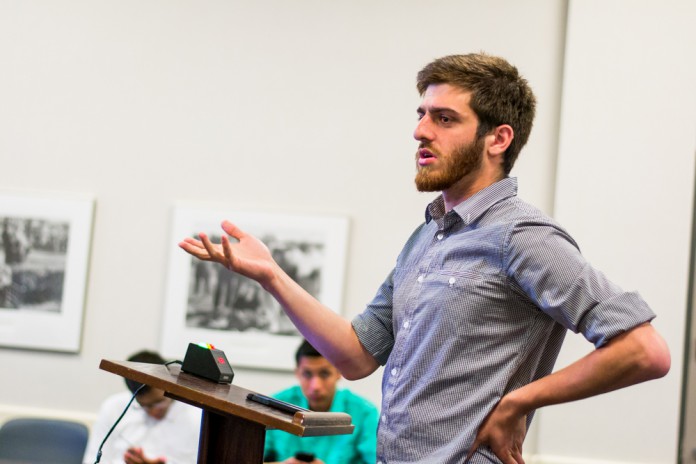 Associated Students Senate tabled “A Bill to Officially Withdraw ASUCSB Membership from the United States Student Association” at its meeting on Wednesday, April 16.

USSA is a national student-led organization that aims to address student issues at the local, state, and national levels through grassroots movements. According to AS executive officer reports, about $10,000 of AS funds are currently allocated toward its membership in the organization.

The bill was met with opposition from several sources Wednesday evening, including co-chair of AS Human Rights Board (HRB) Anisha Ahuja, USSA Golden Pacific Region Chair Navkiran Kaur, and several former AS executive officers, who composed a letter read to the Senate by second-year sociology major Mohsin Mirza.

Kaur, also a candidate for 2014-2015 AS President, expressed concerns that this withdrawal would force University of California, Santa Barbara students to pay to attend USSA conferences out of their own pockets. She also criticized the Senate for a lack of transparency regarding the proposal of a bill that could, in her eyes, have a significant impact on students.

“Without our involvement in USSA, we are pulling ourselves out from the nationwide student movement, and that is disgraceful,” Kaur said.

The letter read by Mirza, which discouraged the Senate from passing the bill, cited several accomplishments allegedly brought about by AS’s relationship with USSA. The letter was signed by AS alumni whose respective terms as executive officers spanned a number of years, from 1991 onward.

During his weekly report, AS President Jonathan Abboud addressed transparency concerns by reminding the Senate that bills are required to be tabled for one week before passing in order to provide the public adequate time to consider their implications. When asked for his thoughts on the former executive officers’ objections, he suggested that the letter’s authors could be overlooking some of the internal inefficiencies that he and other current executive officers have perceived within the organization.

External Vice President of Statewide Affairs (EVPSA) Alex Choate clarified during her weekly report that even without direct USSA membership, UCSB students would still be able to attend conferences and serve on the board for the association through the university’s continued UCSA membership.

Choate also referenced a membership evaluation conducted by one of her staff members, which concluded that despite USSA’s increased membership fees, the effectiveness of its campaigns has experienced a substantial decline in the past few years.

“At the root of the organization, I wholeheartedly believe in it, but I don’t think that it’s worth the $10,000 that students are paying right now, especially in this really tense financial climate,” Choate said.

The Senate will reconvene on the bill at its April 23 meeting.