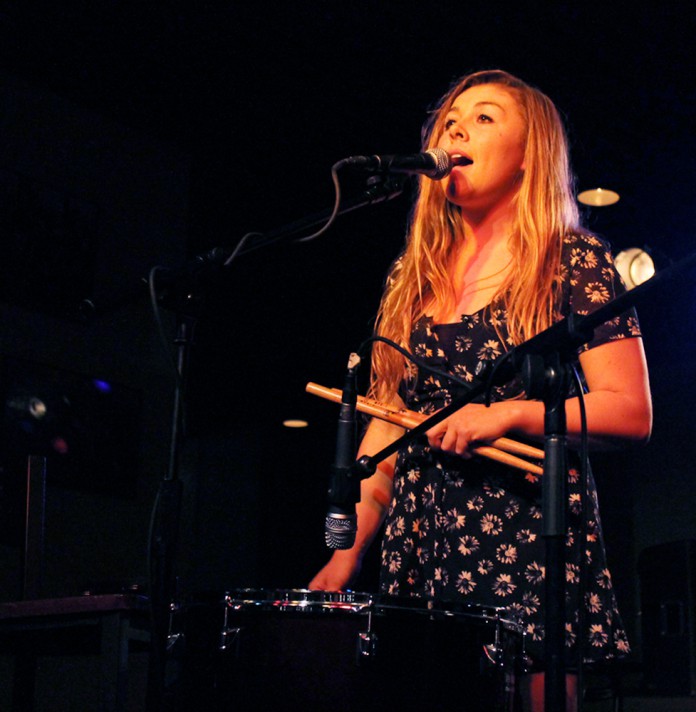 Associated Students Program Board’s 2014 Battle of the Bands marked an upset victory for Yancellor Chang, who was up against Helo, Eastern Bakery, That’s What She Said, and preeminent Isla Vista band The Olé’s. With their victory, Yancellor Chang earned an opening slot for 2014’s Extravaganza concert.

Battle of the Bands, hosted at The Hub on Wednesday, Feb. 26, was a lively show with tremendous performances from some of University of California, Santa Barbara’s finest rock bands. Each group performed for an enthusiastic crowd with deft capability and unique style.

“I was blown away by the production,” said Tim Paulson, a history graduate student. “It was totally pro, and the bands just killed it.”

The show opened up to an undersized, rain-soaked crowd with folk-rock trio Helo taking the stage first. But the scene quickly heated up with the group’s performance of their original song “To the West.” The locomotive cadence of drummer Eric Stanton, an electrical engineering graduate student, matched pace perfectly with the percussive strumming of UCSB alumnus Benjamin Boyce’s acoustic guitar. Lead singer Laura Moreno, fourth-year English and Spanish double major, rounded out Helo’s cohesion with a soulfully enchanting voice. The rapport between Moreno and Boyce’s vocals queued up an expectation for more, only to be cut short by their 20-minute time limit.

The audience kicked up with boisterous applause when the The Olé’s took the stage. Their strong following definitely made its presence known in the cheers of the crowd. Boasting the most members of the night’s groups, The Olé’s large stage presence was superseded only by their sound. Illuminated with a bright and uplifting brass section, the group’s ska-reggae rendition of Tupac’s “California Love” cut through the crowd. The falling-down funky vibe of their original song “No Strings Attached” left no man sober, capping off a powerfully engaging breakdown-ending. The performance suffered somewhat from a tinny mix that bled into the rhythm section, but the experience itself was too great to be stopped.

Punk/garage-rock trio Eastern Bakery was next to hit the stage, and they pulled no punches in their frenetic foray. Lead vocalist Brandon Downum, third-year CCS literature major, shot out with one of the biggest surprises of the show, a cover of Dido’s “Thank You” that declared the group’s unique quality, skillful musicianship, and high-speed energy all in one short shot. Not a lick was missed, despite the band’s lightening quick delivery, and barely a breath made it out between each song; their well practiced pace took the lead in their 20-minute shotgun blast of punk-rock renaissance.

That’s What She Said, a four-woman pop-punk powerhouse, set the stage alight with a fiery ferocity. The group was only formed in fall quarter after the members met in Music Production Club, but it didn’t show in their performance.

“We all just jammed one day and it sounded really good,” said lead singer Marie Stassinopoulos, third-year psychology and sociology major. The band is known for their crowd-pleasing covers, and Stassinopoulos commented before the show that “We really like our Paramore; we all aspire to be Hayley Williams one day.”

The pop-punk style was very evident in their “I Try,” featuring a bright, Blink-182 style chord plucking and abbreviated vocal harmony. The final jam, a sing-along cover of Weezer’s “Undone,” cemented the group’s ability to command a crowd.

Wrapping up the show was Yancellor Chang. Patrick Therrien, lead vocalist and fourth-year mechanical engineering and physics double major, burst on stage with an electric attitude and a mane suitable for a ’70s rock-god. He declared, “We’re Yancellor Chang, and we like to f*ckin’ party.”

What followed was a technically rough performance marred with feedback issues and an unfortunate discord between instruments. The inconsistencies of the performance mostly cleared up by their final song, an elongated, jammed-out cover of The Rolling Stones’ “Beast of Burden.” At that point Therrien’s magnetism mounted, the band found its groove, and the crowd was won over.

Shortly after, AS Program Board’s Special Events Assistant Brandon Pineira announced the judges’ decision. Brad Katz, guitarist for Yancellor Chang and third-year mechanical engineering major, commented, “I’m stoked. I’m on top of the world right now.” He added, “I want to say thank you to all the other bands.”

Yancellor Chang was the fledgling band at the battle; Katz commented, “This is our fourth show. We submitted our first demo before we did two shows, I think.”

Many attendees of the Battle of the Bands were surprised at the judges’ favoring of Yancellor Chang. Kyla Sebens, KJUC program director and fourth-year environmental studies major, was one of the three judges, and in a post-show interview she said that a major criteria for the judging was “crowd reaction, stage presence, and energy.” By those factors, it’s easy to see why Yancellor Chang took the crown.