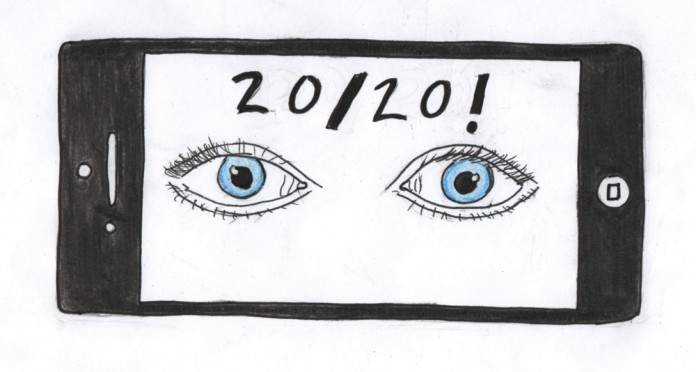 An app developed by University of California, Riverside neuroscientist Aaron Seitz is capable of training users to see farther than before.

According to a study published this week in the journal Current Biology, Seitz and his researchers performed their research for the app, called UltimEyes, on 19 players from the UCR baseball team. After 30 sessions of using the app for 25 minutes at a time, the players’ vision was improved by 31 percent–beyond perfect 20/20 vision. According to the International Business times, vision training is becoming more and more important in major league baseball teams because of the necessity of seeing the baseball and calculating when to swing in order to score runs and win the game.

“We were using standard, on-the-wall eye charts. Normally, you stand 20 feet away, but our charts only measured down to 20/10 [vision]. So we moved some of these players 40 feet away from the eye chart and they were still reading the low lines. I was shocked,” Seitz told Popular Mechanics.

Seven of the players attained an astounding 20/7.5 vision, meaning that a distance of 20 feet, they were able to see what someone with normal vision could see at 7.5 feet.

According to Popular Mechanics, UltimEyes works through rewiring the brain, a concept known as neuroplasticity.

“Within the last decade or so we’ve started to learn that brain fitness is a bit akin to physical fitness,” Seitz told Popular Mechanics. “If we exercise our brain in the proper ways, pretty much everything that the brain does should be able to be improved.”

UltimEyes exercises the visual cortex, or the part of the brain that controls vision. Researchers have determined that the visual cortex breaks down incoming information from eyes into fuzzy patterns called Gabor stimuli. Thus, UltimEyes training works through the theory that by directly confronting eyes with Gabor stimuli, it is possible to train the brain to process them more efficiently. Over time, this practice improves the brain’s ability to manufacture clear vision at farther distances.

The app is certainly different from the brightly colored games that can be found in the app store. UltimEyes presents the user with increasingly difficult challenges of identifying faint Gabor stimuli shown against a gray background.

The effects of Seitz’s app are very real.

“Trained players showed improved vision after training, had decreased strike-outs, and created more runs; and even accounting for maturational gains, these additional runs may have led to an additional four to five team wins,” said researchers Seitz, Jenni Deveau, and Daniel J. Ozer in the study published in Current Biology. “These results demonstrate real world transferable benefits of a vision-training program based on perceptual learning principles.”

Testimonials on the UltimEyes website reveal that the app is not just for athletes. One reviewer, a 45-year-old woman named Cora, saw a measurable improvement in her vision.

“I did the program over a two month period and could read three lines better on an eye chart from twenty feet away!” said the woman.

However, according to Popular Mechanics, the details about exactly how UltimEyes works on adult neuroplasticity are hazy.

The UltimEyes app is available for download from the iTunes app store for free. A license code must be purchased from the official website for $5.99 to make the app work.