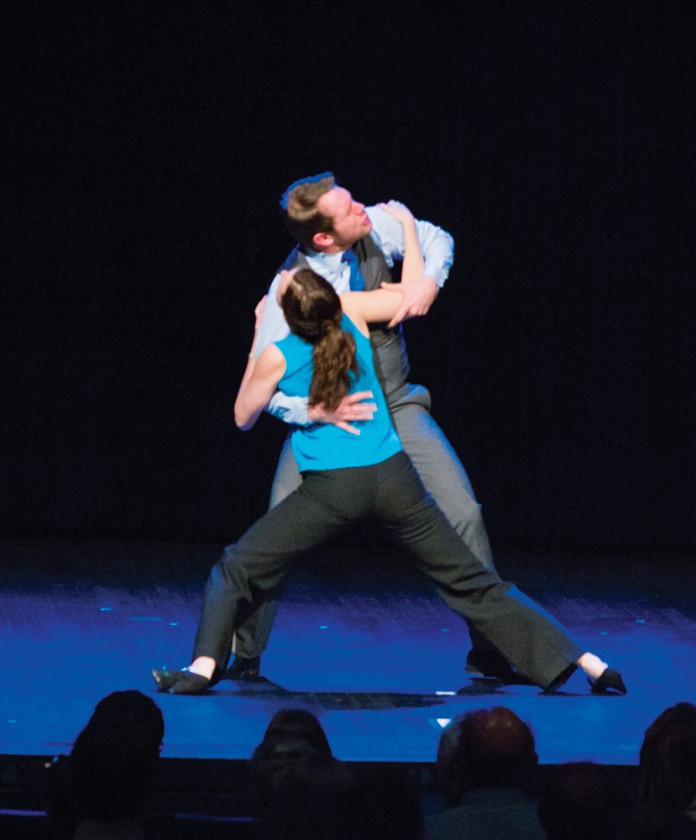 The troupe began their performance with a hilarious musical number about the realities of modern adult life. Singing about the importance of playing “the game,” they provided a variety of scenarios in which most people would prefer nothing more than to tell the honest truth. For example, when a groom asks his friend to be his best man, but he declines and says he does not think the marriage will last two years and would prefer not to be part of it. Or when a woman asks a coworker if he’d like to see her recent vacation photos, but he declines by saying, “I was not there and don’t care that you were.” This perfectly set the tone for the group’s smartly crafted, honestly satirical, and laugh-out-loud funny material.

What followed was a medley of The Second City’s signature mix of smart satire and quick-witted improvisations. Some of the highlights of their scripted material included a sketch in which a man tries to impress his date by “trying out his Spanish” at a Mexican restaurant by enunciating “guacamole” and “tacos,” and rolling the “r” in “burrrrito” and “rrrrice and beans.”

Another great sketch depicted two university ethics professors giving a senator a crash course in ethics, complete with the requisite demonstration of puppets to appeal to the senator’s preschool-level understanding of ethics (or “ethnics,” as he mistakenly called it).

Their improvised material allowed for some audience participation, turning simple words like “wrestler,” “microwave,” and “7-Eleven” into some very imaginative sketches about a disgraced former wrestler, a woman who strongly believes microwaves are the future, and a 7-Eleven employee’s first day on the job.

Sprinkled throughout the show were shorter sketches that were only a few seconds long. In one, two women are having an intimate conversation over the phone, only to be joined by an eavesdropping NSA agent. In another, a man introduces himself to his neighbor as a registered sex offender; the neighbor is furious and demands to speak to her congressman, but the plot twist is that the man is her congressman. Lastly, an unapologetic doctor tells her friend that she isn’t the only doctor to sleep with her patient, to which her friend replies, “You’re a vet!”

Comedy infused all aspects of the performance, from the opening announcements regarding cell phone use up to the intermission. “Ladies and gentlemen, it is now time for intermission,” announced a troupe member over the speakers. “So go forth and intermit.”

But the night’s finest sketch featured the ladies of the troupe giving an informational presentation on non-violent self-defense for women, or as they put it, “Wits Over Hits.”

When approached by a man attempting to steal her money, second city member Marlena Rodriguez furiously replied by asking, “Daddy?… Daddy?… Why don’t you love me daddy?,” effectively sending the criminal running away in fear.

When approached by a robber, troupe member Liz Reuss replied by hysterically asking the criminal if he wants to move in together, get married, have children, and meet her parents, successfully making him flee to safety.

But when all else fails, Sarah Shook demonstrated how to ward off a criminal by simply and furiously yelling random threats and expletives. “I will f*ck you up, motherf*cker,” she yelled to the criminal, who ran away to the crowd’s laughs.

For the past 50-plus years, The Second City has graduated some of the biggest names in comedy, many of whom have gone on to perform on shows like “Saturday Night Live,” “MADtv,” and many award-winning sitcoms. Wednesday night’s audience may have just witnessed the next generation of great comedy performers.

The Second City opened its doors in December of 1959, formed by previous members of Chicago comedy troupe The Compass Players, who stopped performing in 1958. It has since been producing some of the biggest names in comedy, including Martin Short, Tina Fey, Steve Carell, Catherine O’Hara, and Stephen Colbert. Over 50 years after its start, The Second City is still performing around the country and developing the next generation of comedy stars.

UCSB Arts & Lectures brought The Second City back to UCSB due to popular demand, and it’s easy to see why. They delivered a sold-out performance that would have made its founders proud.