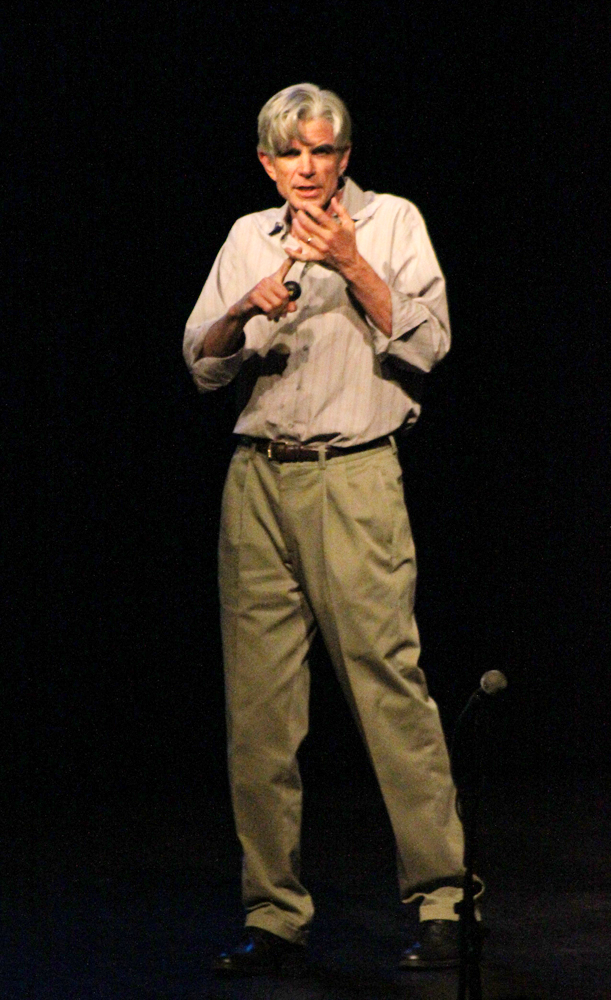 It’s not exactly a huge secret that many, if not most, Americans don’t exactly have the healthiest eating habits. What isn’t quite as generally known is that it’s not necessarily our own fault.

This is the basic premise of the life’s work of New York Times investigative journalist author Michael Moss. Last Saturday at 3 p.m. in Campbell Hall, Moss made a tie-in presentation on his bestselling book “Salt, Sugar, and Fat: How the Food Giants Have Hooked Us,” an exposé on the marketing strategies and manufacturing methods used by the multi-national corporations responsible for much of the processed food produced and sold in the United States and around the world.

The presentation, hosted by Moss himself and presented by University of California, Santa Barbara Arts & Lectures, is the culmination of Moss’ digging into the inner-workings of the food industry. In “Salt, Sugar and Fat”–the book as well as the presentation–Moss relates his findings garnered from obtaining documents of board meetings and conferring with former executives from the Coca-Cola company, Kraft Foods, Oscar-Meyer, and Kellogg’s, among others.

In 2010, Moss won the Pulitzer Prize for his investigative work into the meat industry and the dangers of contaminated meat.

“It was very clear to me that the meat industry was not taking some very simple steps to protect the product’s safety,” said Moss when discussing a conversation he had with a source within the meat industry.

“As tragic as these instances of these contamination are, there is this other public health crisis afoot,” continued Moss as he quoted his source from the meat industry, “involving things that me, my industry, is intentionally adding to its products over which it has absolute control over.”

Moss describes his work as writing about the “intersection of food and marketing.” Key among his findings is the money and effort which junk food companies spend on finding what he terms the “bliss point,” the exact ratio of salt, sugar, fat and other additives which targets the parts of the brain in such a way that makes junk food as addicting as possible.

In the excerpt of “Salt, Sugar and Fat” available for viewing on the book’s website, Moss relates the experiences of Jeffery Dunn, former marketing executive for the Coca-Cola company and president of their North and South America branches.

“I was really struck by how many of the people I had spent time with who…have this feeling of substantial regret about their life’s work,” said Moss, referring to his correspondence with Dunn. “He explained to me how they would call their best customers not their ‘best customers’ but ‘heavy users’…who would drink two cans of coke or more per day.”

A parallel example Moss cited in his lecture is the product line of Doritos Tacos made by Taco Bell, which he discusses in part of a video series he has recently made with fellow staff from the New York Times called “What’s In It?,” which he showed at the lecture.

Moss concluded his lecture with a Q&A panel. Ellie Shanklin, a health coach and Ventura resident who attended the lecture, had previously been familiar with Moss’ work. When asked about her reaction to Moss’ presentation, she said that “it hits home in the sense that a lot of people blame themselves about their obesity… There’s a lot of other factors that go into it than just saying, ‘move more and eat less.’”