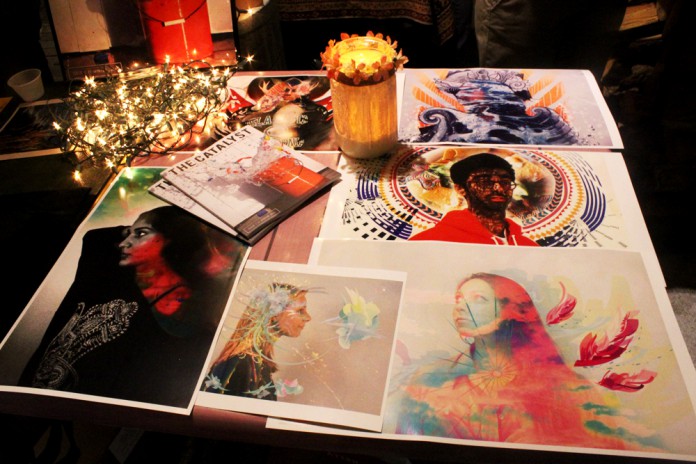 Last seen in 2007, The Catalyst—University of California, Santa Barbara’s newly revived literary arts magazine—officially debuted its return with a launch party on the evening of Thursday, Jan. 30, at the Isla Vista Food Co-op.

With rows of art pieces from featured artists, performances by local musicians Helo and Cub’b, live poetry and prose readings from featured writers, and free food samples from the co-op and local vendors Rock Rose Provisions and Imla’kesh Organics, the showcase drew together a large crowd of students, professors, community residents, and art enthusiasts to experience and appreciate the artistic endeavors of UCSB’s students.

“It’s exactly how I imagined it would be,” said third-year English major Natalie O’Brien, about the magazine finally coming into fruition.

The Catalyst’s editor-in-chief, O’Brien explained that she first received the idea to re-kindle the magazine during a conversation about starting a collaborative writing club with UCSB English Professor Candace Waid.

O’Brien said that the purpose of the magazine is to “bring together people at UCSB in addition to bringing together different types of media in a collaborative effort”–exactly what was happening at The Catalyst’s showcase.

Much like the magazine’s distinctive display of various literary genres and visual art mediums, the entire showcase was marked by its diverse display of art. The music ranged from the soothing rock sounds of Helo to the down-tempo, experimental beats of Cub’b. The visual art displays included paintings on canvas and wood, as well as photography, prints, and sketches.

First-year College of Creative Studies art major Vijay Masharani had eight of his paintings on display at the showcase. One of his works, titled “The Suburbs,” represents “how people construct their identities in a suburban environment, whether it be through going to different places or doing drugs, etc.” This painting, Masharani explained, was inspired by his own neighborhood in Belmont.

Another artist whose works were displayed at the showcase was third-year linguistics major Amanda Excell, who worked on a series of prints in the theme of Sailor Moon. Excell explained that most of her works are based on humor and pop culture, and that this particular series consists of “buff men dressed as sailor girls.”

“It’s good that art is displayed because now people can see the artistic side of Isla Vista,” said Excell.

During the poetry-reading portion of the evening, Emily Hunt, fourth-year comparative literature major and French minor, read her poem, entitled “Sestina.” Written while she was living in Paris, the poem allowed her to adopt a voice that she described as similar to that of a “lovelorn 40-year old man.”

Hunt said that she feels great about being featured in The Catalyst, because as a writer she is trying to get published as much as possible. Hunt also expressed her gratitude toward the significance of The Catalyst in contributing to culture at UCSB.

Many of the attendees of the showcase were pleased at the overall production of the magazine and the organization of the event.

“It’s nice to see all this creativity in IV,” said second-year biology major Maya Setungamudali. “You don’t often get this type of vibe here. Sometimes you can forget that students are so artistic.”

Setungamudali was not the only one who enjoyed the atmosphere of the showcase. Many other students commented on the festive ambiance of the event with its displays of art, free food, great music performances, and mixture of dialogue centered on art and literary pieces—all against the backdrop of an otherwise ordinary evening at Isla Vista.

The turnout of the evening was high, and the limited 750 copies of the magazine were running out quickly. The Catalyst as a magazine can be expected to be a true catalyst—as its name implies– in contributing to the underrepresented art culture of UCSB, bringing together students to create pieces that truly create “reactions.”

Although there are a limited number of prints, the magazine will be available in PDF form on The Catalyst’s website for those who missed the showcase. The website also has submission forms for students interested in contributing to the magazine.

“I was very excited when I heard about The Catalyst since our school lacks a medium for arts and since the culture of IV is small,” said second-year political science major Christina Vargas. “I hope funding for this continues.”