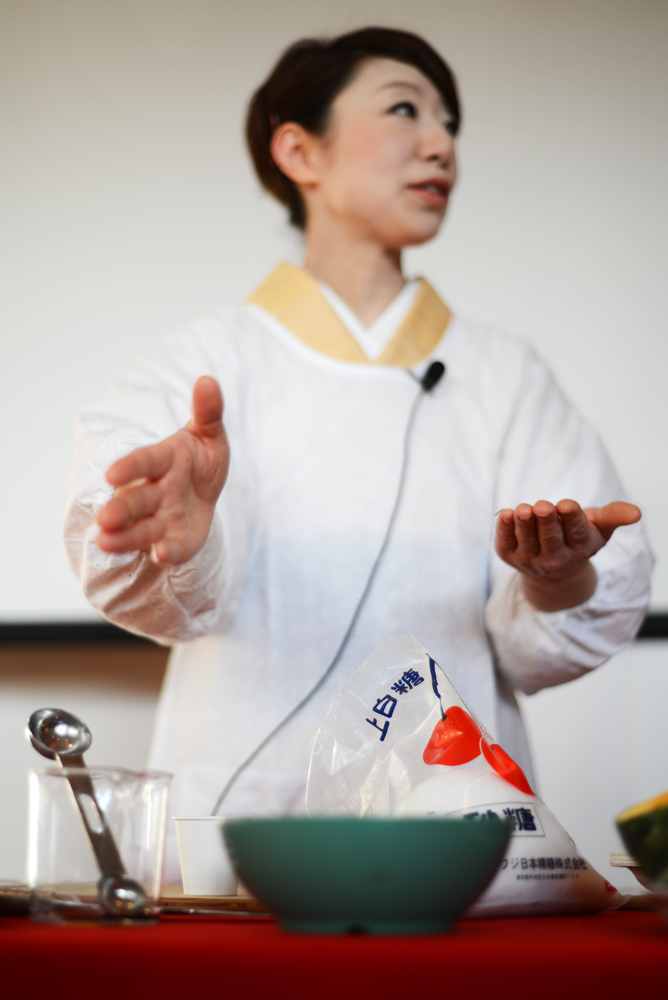 Traditional Japanese cuisine expert Sugimoto Setsuko came to the MultiCultural Center University of California, Santa Barbara this past Thursday, Jan. 31. Setsuko, along with her translator, led several guests through a wonderful demonstration of some of her famous dishes.

Setsuko’s cuisine, “Obanzai,” is prepared through the seasons in order to create meals that are not only economical but also ecological. Setsuko pre-prepared three courses of dishes for the event so that guests could try her versatile cooking. Her first dish, called nimono, can be made with either fish, meat, tofu, or vegetables. Setsuko chose to make the dish with pumpkin, which she took and simmered in a stock that included soy sauce, iriko (cooked/dried anchovies), and sugar. All ingredients were picked up on her way into Santa Barbara. Setsuko also gave some pointers on how to be able to make the dish on your own.

After a few instructions Setsuko allowed the guests to try a sample of her dish.

All the guest seemed very pleased and enjoyed the dish. Setsuko said to pay attention to the combination of the savory and salty flavors, as mixing totally different flavors of ingredients allows a dish to challenge your taste buds.

For her second dish, Setsuko prepared namasu, a traditional Japanese dish that has no heat involved. The dish is a very simple one, with only two main ingredients: radishes and carrots. It also has a sweet and sour flavoring to it as well as a certain texture on the ingredients due to the addition of salt.

Setsuko has a simplicity to her dishes, but she also pays great attention to detail, such as the length of the vegetable when cutting it. It is incredible that the combination of so few ingredients could make such a powerful dish, with virtually no heat and only a few vegetables marinated in some vinegar and salt. The crowd appeared very pleased by the namasu, as their clean plates verified.

For her last dish, Setsuko prepared dashi, which is a basic stock for making soups. She had the audience try each individual ingredient separately before having the dish as a whole. In the soup, she used two main ingredients: kelp and bonito flakes. After guests sampled the bonito flakes, stock kelp was given in a cup as a drink. The kelp had a fresh taste to it, which gave the audience an idea of how the two ingredients would work together for the stock. After the stock was given out, it was clear how eclectic Setsuko’s style of cooking is. As a chef, Setsuko is able to take simple everyday ingredients and create a dish truly representative of her culture. Those lucky enough to sample her dishes are bound to experience a burst of exceptional and unexpected flavor.