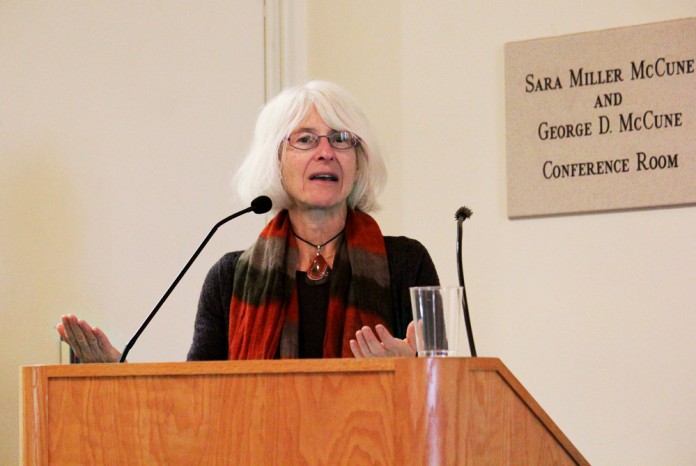 Academia figures from across the country gathered at the McCune Conference room in the Humanities and Social Sciences Building to discuss the 1960s feminist movement at a conference hosted by University of California, Santa Barbara on Friday, Feb. 7.

The conference, titled “Re-Reading the Feminist Sixties,” was organized by feminist studies Professor Eileen Boris. This event is part of a larger multi-event series, titled “The Great Society at 50,” organized by history Professor Alice O’Connor.

The conference’s title is meant to reflect feminist activism in the 1960s only in context of the women as opposed to citing the women’s activism as a response to other social events occurring at the time.

The program was divided into three separate categories: work, social movements, and politics. Each of these categories was supported by multiple real-life case-studies gathered by academia.

A frequent topic of discussion was the creation and poor function of the Equal Employment Opportunity Commission (EEOC). Article VII of the 1964 Civil Rights Act “prohibits employment discrimination based on race, color, religion, sex, or national origin,” which served as a springboard to establish EEOC in 1965.

EEOC, along with many other government agencies created under the 1964 Civil Rights Act, did not function well when first established; becoming inundated with thousands of sex-based discrimination cases a month brought the natal commission to deadlock, causing many single mothers, especially those who were women of color, to be flatly denied or given inadequate economic or employment assistance.

“Looking at EEOC’s early records, it appears that they really didn’t know what to do about sexual discrimination,” said Katherine Turk, assistant professor of history at University of Texas Dallas.

The absolute dysfunction and logistical failure of EEOC led many women to assume that written legislation could not alter years of misogyny. From this bureaucratic bedlam, women would unite in common interest of self-help, forming multi-cultural coalitions all focused on promoting women’s interests.

Some groups, such as the Black Panthers, would be seen uniting with women.

“What’s interesting about these groups is that contrary to their self-help philosophy, many of them never stopped making claims to the government,” said Melissa Fisher, an assistant professor at the New York University Department of Social and Cultural Analysis.

During a time where women made 60 cents of every dollar earned by a man and faced stagnant employment mobility, the glass ceiling seemed impossible to crack. In regard to how women were–and still are–inhibited from occupying professional employment positions (the glass-roof effect), Fisher discussed the first generation of high-finance Wall Street women that emerged out of the 1960s movement.

“Most of the women who became ‘women of Wall Street,’ were not upper-class, they were daughters of salesmen and stay-at-home moms, stereotypical middle-class Americans,” said Fisher.

Muriel Seibert was cited as one of the first business women to finally break through the glass ceiling in 1967 when she purchased a seat on the New York Stock Exchange for $445,000.

Fisher also focused a majority of her discussion citing ethnographic research and reflecting on her 2012 book “Wall Street Women.”

“Re-reading the Feminist Sixties” was sponsored by the Center for Research on Women and Social Justice. Events from “The Great Society at 50” series will continue into spring quarter.