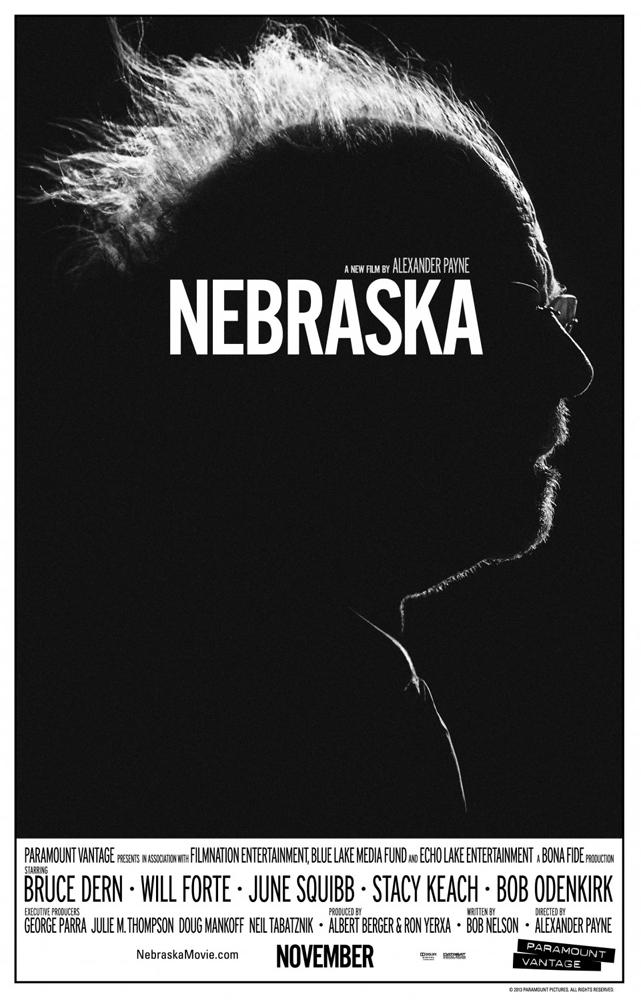 “Nebraska,” the six Oscar-nominated 2013 film directed by Alexander Payne, was screened at Pollock Theater on Friday, Feb. 7, presented by the University of California, Santa Barbara’s Carsey-Wolf Center’s Script-to-Screen series. Oscar-nominated screenwriter Bob Nelson joined the audience for a Q&A session after the screening.

“Nebraska” tells the story of Woody Grant (Bruce Dern), who is convinced that he’s won a million-dollar sweepstakes prize, and his son David (Will Forte) as they travel by car from Billings, Montana to Lincoln, Nebraska to claim Woody’s prize. Along the way they find themselves waylaid in Woody’s hometown of Hawthorne, where Woody reunites with old friends and neighbors, and where David discovers more about his enigma of a father.

When asked what inspired him to write the film, “Unemployment, desperation, and fear” was Nelson’s immediate half-kidding answer. Nelson said his career began with writing sketch comedy shows, shows with no singular plot but rather a series of short comedic scenes, or “sketches,” which we see today in shows like “Saturday Night Live,” “Portlandia,” and “Key and Peele.”

Nelson became a cast member and writer for the 90s Seattle-based sketch comedy TV show “Almost Live!”. When “Almost Live!,” which aired right before “Saturday Night Live,” came to an end in 1999, he was out of work and was getting ready to move to Los Angeles.

According to Nelson, a friend who worked in television told him that Hollywood agents and producers liked to read film scripts from TV writers, in order to gauge how they handled story and character. It was killing two birds with one stone that led Nelson to come up with the idea for “Nebraska.”

“Fortunately or unfortunately–however you look at it now–this was the only idea I had,” said Nelson.

The initial script for the film was finished in 2002. But the process of writing the script was particularly difficult for Nelson, given his background in sketch comedies.

“It was a struggle to write because I’ve never written anything more than five minutes…,” said Nelson. “So the thought of trying to write an hour and 45 minute story was very daunting, and it took me quite a while.”

The actual inspiration for the story came partially from Nelson’s family background.

“My family is from Nebraska. They moved when I was six weeks old because I said ‘Let’s get the hell out of here,’” joked Nelson. “But growing up I used to go back and visit relatives on the farms in small towns, and I grew to love the place.” Much of “Nebraska” takes place in small towns and rural tight-knit communities.

One of the major themes in the story explores the idea of family, as well as the love and burdens (mostly burdens) that come with it. Woody and David have to deal with their Nebraska relatives, who inevitably transform into vultures when they learn about Woody’s “fortunes.” Nelson even takes a page or two from his own family gatherings.

“My dad had 17 siblings, and that’s where those uncles come from,” said Nelson, referring to Woody’s many brothers and sisters in the film.

As to why the film took so long to make, given that the script was finished in 2002, most of it can be attributed to Alexander Payne’s unwillingness to make another road trip movie following his 2004 “Sideways.” Payne wanted to hold off making “Nebraska” until after his next project “The Descendants.”

“The Descendants” did not come out until 2011, and the following year was spent scouting locations and auditioning actors for “Nebraska.” Waiting for the film to be made turned out to be a 12-year-long journey that culminated with Nelson’s script being nominated for an Oscar in mid-January.

As for whether or not Nelson plans to return to sketch comedy, he said, “There’s a gratification to [being able to] tell a full story and develop characters and to have it pay off. I’d love to get a chance to write a sketch here and there, once in a while in the future, but this is what I love doing now.”