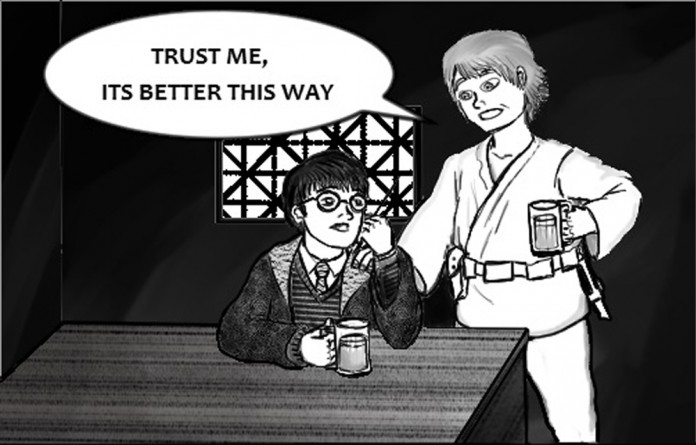 Unlike many other novels targeted to a similar demographic, the Harry Potter series has never really been about romance. J.K. Rowling penned a series of novels about a magical boy with a lightning-shaped scar that defined the childhoods of an incredible number of children and young adults. What she did not write, for example, is a series featuring a bland girl who has to choose whether she loves a teenage werewolf or a perpetually smirking vampire.

“I wrote the Hermione/Ron relationship as a form of wish fulfillment. That’s how it was conceived, really,” said Rowling in an interview with Wonderland Magazine. Instead, Rowling declared that Harry should have ended up with Hermione. “For reasons that have very little to do with literature and far more to do with me clinging to the plot as I first imagined it, Hermione ended up with Ron.”

In the interview, Rowling apologized to the fans for the shock. “I can hear the rage and fury it might cause some fans, but if I’m absolutely honest, distance has given me perspective on that. It was a choice I made for very personal reasons, not for reasons of credibility. Am I breaking people’s hearts by saying this? I hope not.”

Fans have already emphatically responded to the interview. Some fans praised the original choice because it went against literary tropes, while others said that Hermione deserved someone more compatible than Ron due to her considerable brain and willpower. Still others thought that Hermione should not have gotten married off at all.

Actress Emma Watson, who played Hermione in all of the films, agreed with Rowling’s statement. “I think there are fans out there who know that too and who wonder whether Ron would have really been able to make her happy,” said Watson in the same interview with Wonderland. Perhaps Watson and Rowling felt this way because of the palpable onscreen chemistry between Watson and Danielle Radcliffe, who played Harry Potter.

If Rowling really was afraid to “break people’s hearts,” she probably should have kept her thoughts to herself. Why Rowling has continued to discuss her second thoughts is a mystery. The last Harry Potter novel came out approximately seven years ago, so perhaps Rowling’s constant interviews about the Potter franchise are a gambit to stay relevant in the wake of the lackluster reception of her more, shall we say, mundane fiction.

As the years pass, no doubt Rowling will drop other bombs. Two years ago, in fact, Rowling divulged her inner considerations to kill off the character of Ron. Another surprising announcement that has generated an incredible amount of umbrage (ha, get it?) is the revelation that Dumbledore was gay. It is important for critics and fans alike to remember that Dumbledore, Harry, Ron, and Hermione are characters composed of words on paper. They are not real people. These characters may have seemed like childhood friends to some, but an uncompromising attachment to the world created by Rowling certainly does not give fans any control over the characters and their potential plot trajectories or the agency to stifle the author from voicing her opinions. Rowling’s admissions should not and will not negatively impact readers’ lives in any significant way.

Perhaps the real lesson Rowling and other authors should take from the whole debate is to never include a sappy epilogue. Through tying up a debatably loose romantic end, Rowling ended up getting tangled in the mess she created. Ultimately, no author is ever satisfied with his or her work. However, that does not mean the author should feel it necessary to blurt out all of their doubts.