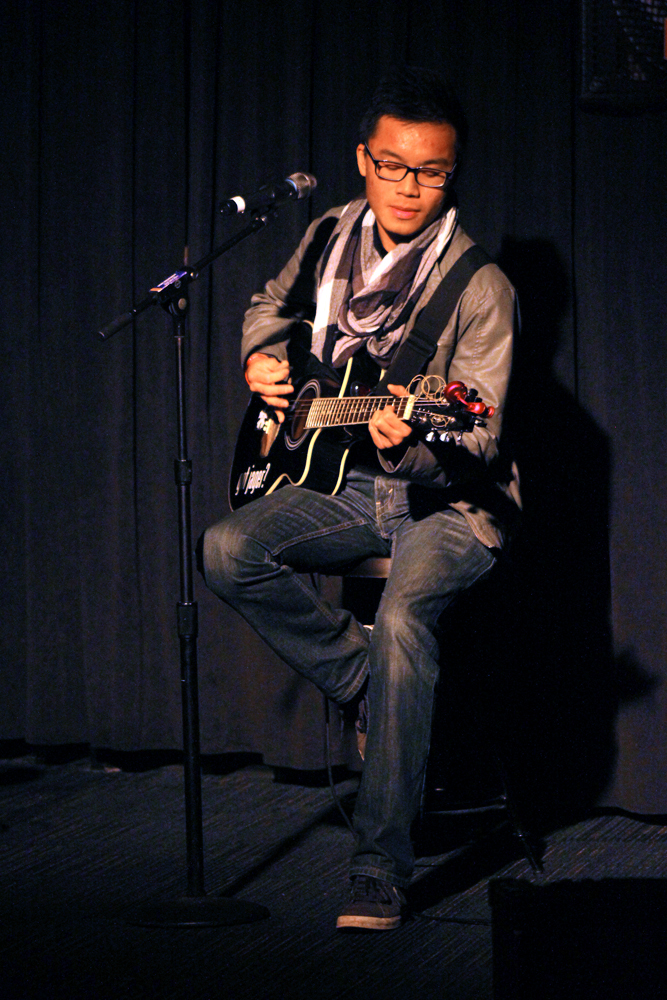 Change for Change, the Residence Halls Association’s open mic night in The Hub, featured many talented University of California, Santa Barbara students who looked to donate to a charity of their choice on Thursday, Feb. 13.

Change for Change showcased a wide array of talents; there was everything from singing to poetry, with a rant or two thrown in. Fifteen different performers participated, with each performer representing a different organization that guests could support. At the end of the night, audience members donated money to the performance they enjoyed the most. The three performers who received the most money received an additional $100, $50, and $25 for first, second, and third place, respectively.

The ambiance in The Hub was relaxed, with colorful yet soft lighting. The audience was lively and upbeat, and the performers entertained all night long. Cheers, whistles, and snaps accompanied the performers’ songs, poems, and rants. A few groups covered songs, while others read aloud poetry from the heart.

Representing Queer Student Union was fourth-year Stefan Fan, who read aloud his poem “Coffee in IV,” which described observations he had made about the characters of Isla Vista and the colorful cafe culture of college students. Another of his poems, “State Street,” was more critical, and it examined the glaring problem of the juxtaposition of the wealthy and the homeless on State Street.

Some of the performers chose charities to donate to out of simple interest for their cause, while others had a more personal connection to what these organizations stand for. One example is Leo Ayala, a community resident, who performed a spoken word with fellow performer Brandon Johnson, the Assistant Resident Director for the Santa Cruz Residence Hall.

“I am supporting United Way of Santa Barbara County,” Ayala said, “I was part of the local non-profit sector, and the service they provided was my upbringing.”

As explained by Ayala, United Way of Santa Barbara raises funds locally collected from donors around the county to put on programs like Fun in the Sun, which is a seven-week academic enrichment program to help K-9 grade students develop their literacy. Through Fun in the Sun, students learn at least two reading levels during the summer to lower the achievement gap when school starts again in the fall.

“Due to Dolly Parton’s Imagination Library, any child up to the age of five can gain one free book a month,” Ayala said. “For communities where parents can’t afford to buy their kids books or can’t afford to take their kids to the library because they’re working two jobs, those books come in handy for students. The funds from this event will go toward that.”

Change for Change was sponsored by the Residence Hall Association and brought to fruition by fourth-year sociology major Alexia Enriquez, third-year economics and psychology double major Angela Trinh, fourth-year sociology major Julia Anderson, and fourth-year global studies and German double major Sam Topuzes. Trinh, a Manzanita resident assistant, explained what inspired her to put on this open mic night instead of another type of fundraising event.

“Open mic nights have always been more than just people going up there,” Trinh said. “You’re showing a lot of vulnerability when you’re willing to perform in front of hundreds of people. It’s more than just them singing. It’s them showing you something about themselves. It’s about providing them a space that they feel comfortable in.”

The ultimate winners of Change for Change, with a total donated amount of $75, were fourth-years Megan Foronda and Sam Dacanay, who performed a rendition of Beyonce’s “Drunk In Love.” That amount, along with the additional $100 that is given to the first place performer, will be donated to their chosen organization, the Philippine Typhoon Haiyan Relief. Dalia Juarez and Rod Gomez, representing National Eating Disorders, got second place, and fourth-year Morgan Vinson for Keep a Child Alive won third place.