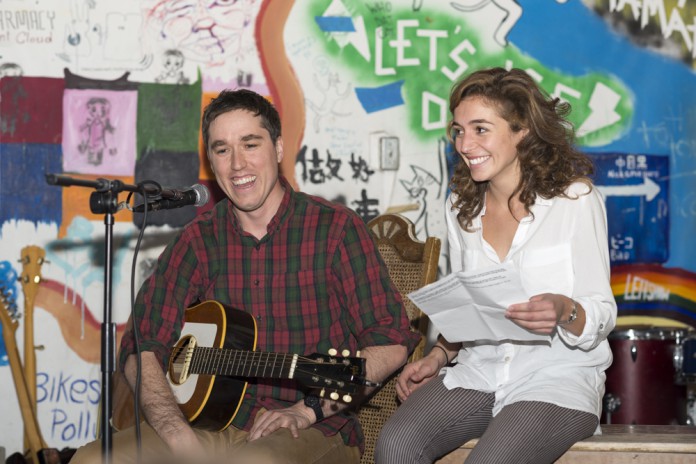 The Biko cooperative on 6612 Sueno serves as a sort of haven for artists and art-lovers alike to share and enjoy various forms of self-expression. On Saturday, Feb. 1, The Breaking Yard, a group of musicians from Portland, Ore., performed in the intimate Biko garage, along with Los Angeles based singer-songwriter Matt Kivel. The night reflects the mission of the venue by creating unique works of art through the collaboration of diversely talented individuals.

Starting off the night was The Breaking Yard. The group, which received its name from the striking imagery of a place where ships are fragmented and reassembled, the nautical term for which is the breaking yard, currently consists of five members. The band collectively plays a variety of instruments, at least one of which you’ve probably never heard of: Mel Baker on vocals, harmonium, violin, guitar, glockenspiel, and mandolin; Stephen Baker on acoustic guitar, vocals, and harmonium; Joseph Krause on drums and chains; Jesse Thompson (temporarily in the place of Miles Orion Butler) on banjo, glockenspiel, mandolin, and electric and lap steel guitar; and Matt Widmann on the hammered dulcimer.

The band’s utilization of these eclectic musical tools results in modernized folk music that occasionally emulates the electronic and has been described as “cinematic.” Their performance itself was a spectacle, featuring the musicians engrossed in their respective, often foreign-looking instruments and set against the heavily painted interior of the dimly lit garage.

Sonically, the show transcended the sum of its parts, resonating against the walls to reverberate within the cores of its listeners, as powerful live music tends to do. At times movingly upbeat, at times eerie and gradual, always somewhat soothing, the sound produced by The Breaking Yard created a welcoming space, inviting those in its presence to sway along to its circular rhythms.

The quintet has been consistently extending this invitation to audiences across the country since the end of October, when it began its first full-length, entirely self-managed tour of 35 states, traveling as far eastward as Vermont in a 1989 Chevy van. With only 10 days left of touring before returning to Portland, the band described the experience as unpredictable, transformative, and, as Baker attempted to generalize it, “amazing and awful and everything in between there.”

A common highlight for the members was the connections that they forged with other musicians and randomly encountered citizens of the various cities along the tour route. Often relying on the kindness of strangers, they managed to couch-hop their way across the country and back without paying a dime for lodging. And strangers, it turns out, can be remarkably kind to people who share their passions for as little as $10 a performance, which was the donation price at the Biko show.

“There’s always free beer,” Widmann stated fondly, when asked what his favorite part of the trip was.

Another positively altering aspect of the tour was the strengthening of the bonds between the band members themselves, who spent a significant portion of the past three months in an enclosed space and the entirety in each other’s company.

While Mel and Stephen Baker formed their relationship several years ago in Virginia, setting the foundation for The Breaking Yard with bandmate Butler (who was not present at Biko) in January 2012, the other three became members of the quintet at various moments since the band’s formation. Thompson was swooped up at a show in Nashville, Tenn., on the westward leg of the journey; Krause, who quit his jobs in Seattle to join the tour a week before its commencement, was introduced through Butler; and the band met Widmann, a student in Portland who had spent his summer working on a fishing boat in Alaska, through Craigslist.

Though their immediate plans following the tour mostly involve recuperating after a life-changing three months, the band is optimistic about its future. They will embark on a tour in Scotland and Ireland in June 2014, and, in terms of composition, intend to broaden the boundaries of their characteristic blend of modernity and tradition by featuring more hip-hop and electronic influences.

When asked to impart words of wisdom on aspiring musicians, Stephen declared that commitment is key, with which Mel agreed, adding that the ability to learn from any experience is essential. Krause emphasized the advantage of being surrounded by a diversity of talents, accrediting the strength of the band to the musical variety of its members.

“Be deliberate,” said Thompson, deliberately. “And take every opportunity that you can.”

Kivel, who closed the show, performed a number of mellow songs in his mesmerizingly clear characteristic falsetto, casually joking with his listeners in between songs. The crowd was packed tightly, seated on the floor, which contributed to the warm intimacy of the set.

“This is hands down the best crowd I’ve ever played for,” the singer praised his audience, to a response of whoops and applause.