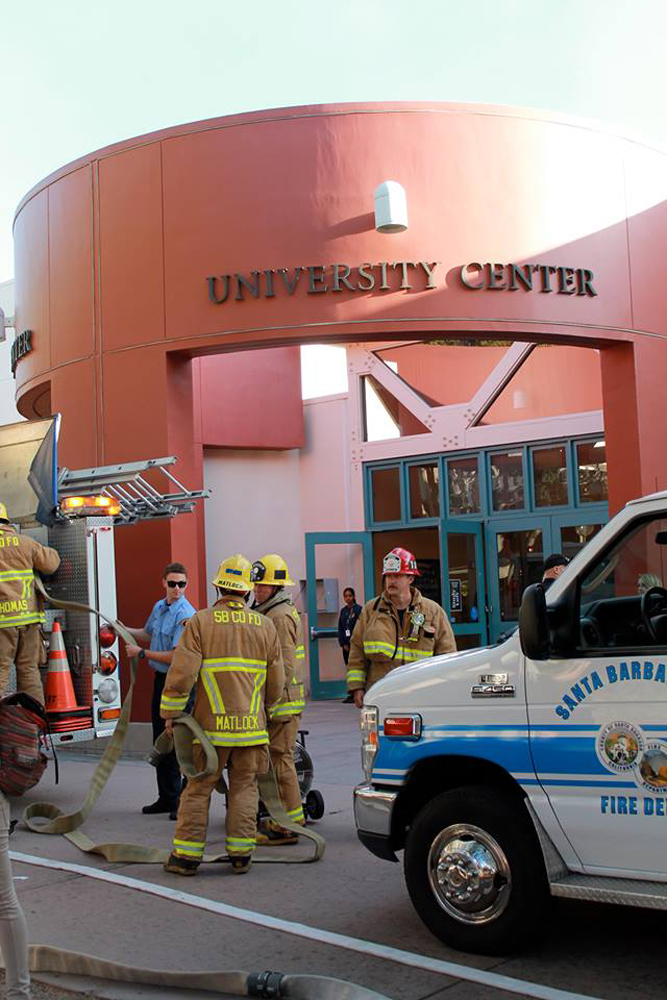 Large amounts of smoke emerged from a room in the University Center Building on the University of California, Santa Barbara campus at approximately 3:15 p.m. on Wednesday, Jan. 29. The small fire, located in a back room behind ground floor restaurants Panda Express and Root 217, caused a large amount of smoke but no visible flames.

The UCen was evacuated and Santa Barbara County Fire was quickly on the scene. No permanent damage was done to the buildings and no one was harmed in the fire.

According to Gary Lawrence, UCen Administration Director of Operations, the kitchen manager noticed smoke seeping out from under the door of the room and flipped a switch to turn off the motor.

Fourth-year economics and accounting double major Dana Ranch, a Jamba Juice employee in the UCen, was affected by the alarm and subsequent evacuation.

“It was really loud,” said Ranch. “Nobody knew if it was a drill or an actual fire.”

Eyewitnesses were distressed by the alarm and the presence of firefighters.

“A few minutes [after the alarm began], the fire truck and the ambulance came in, and then we noticed that they suited up fully and the alarm was still going on,” said third-year psychology and Spanish double major Cynthia Tello. “We could see smoke from the top of the building.”

Richard Pinal, Santa Barbara County Engineer/Inspector from Station 17, B Shift, initially suspected that the incident was a burnt out bearing, but as of a recent interview, remains uncertain about the true cause of the fire. Lawrence was also unable to definitively confirm the source.

Students were let back into the building approximately one hour after the fire alarms went off. Pinal believes that the event was an extremely rare one unlikely to happen again. The faulty equipment will be replaced immediately.

“There was an exhaust duct that goes from the elevator mechanical room on the lower levels,” Lawrence said. “There’s a damper motor and the motor [may have] overheated.”

Lawrence said that repair people will examine the damage on Thursday and replace any necessary parts. Lawrence believes that the damage may lie in the bearing or be a result of faulty wiring in the motor.