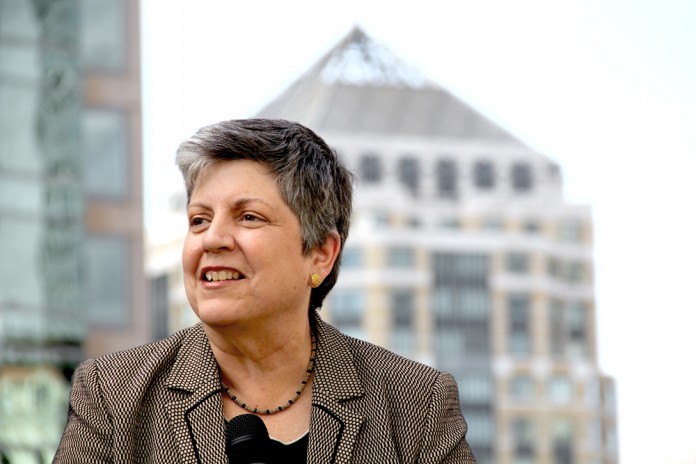 University of California President Janet Napolitano held a one-hour conversation on Tuesday, Jan. 28, over Google Hangout with a panel of UC students to discuss various topics, such as tuition, undocumented students, and graduate students.

This event was organized in response to students wanting their voices to be heard, as well as recent controversy from the UC community regarding Napolitano’s appointment as president. In the past few months, Napolitano has made attempts to connect with the UC student bodies by visiting all 10 campuses; she also plans to host a series of Google Hangouts in order to foster dialogue with students who can post questions in the comments section.

“This is a part of our ongoing efforts to hear from students on issues like tuition, diversity and inclusion, sustainability, and all the other initiatives that we have underway,” Napolitano said.

When asked about the high price of the UC tuition, Napolitano said she’s currently going the traditional diplomatic route by making a case to Gov. Jerry Brown, his staff, and other Californian politicians.

However, she believes the most effective way to convince the state to further invest in the UC system is to reach out to the public at large and allow them to realize the impact that the research of the universities has had on their daily lives through technology, medical advancements, or agricultural innovations.

“I believe we need to have a serious discussion throughout California about the value of the University to the state of California, and its long-term ability to thrive,” Napolitano said. “I think it’s easier for the political decision-makers if they’re feeling from the public that this is something they want.”

However, she did reassure students that the 2014-15 budget will put a freeze on the tuition for the third year in the row. In the meantime, the UC system can then analyze different models for tuition, calculate numbers, and determine which tuition rate is the best fit for the UC system.

“It’s not easy, because when you do tuition, it has a lot of domino effects on how you do that number and how you calculate it,” Napolitano said. “So right now, we’re doing the economic modeling and the penciling out of what it means in the long term.”

Napolitano also noted that due to aid, loans, grants, and UC programs, the average UC student only pays $19,000, as opposed to the national average of $26,000.

“The percentage of students who actually pay the sticker price for the University of California is very, very small,” Napolitano said.

However, Napolitano does recognize that it’s the middle-class students who end up having to pay the most, as they’re not eligible for many financial aid packages.

“The squeeze is in the middle, and there is some relief coming there for families who make up to $150,000,” Napolitano said.

Another controversial subject arose when a student brought up the topic of undocumented workers. Napolitano responded by saying that $5 million has been allocated to undocumented student services across UC campuses and that it will be up to the universities to decide what to do with the money.

“We’ve given them the flexibility to bolster their student centers, make sure they have staff who understand immigration law and help students to apply for deferred action under DoCA, or put it into the form of loans or grants,” Napolitano said.

Napolitano also stated that she has been working on helping UC campuses strengthen their programs for historically underrepresented student groups, and has also been working closely with the community college system. She revealed that the UC administration has been developing a portal for transfer students, which will unify databases and provide the transfer students with adequate knowledge about financial aid to ensure they don’t self-select out of applying to UCs, assuming that a UC education is too costly.

“We get a lot of our first-generation students out of our community colleges, and we want to make sure that transfer process is not only as streamlined as possible, but that transfer students are quickly integrated into the university community,” Napolitano said.

Napolitano also recognized the fact that, in contrast with the past, more and more graduate students are choosing to take the business path rather than pursue higher academic positions in universities, such as becoming TAs or professors. She’s therefore determined to ensure that UCs can better assist graduate students in the development of their professional skills, so as to better adapt to their industry.

“What we don’t do very well is market our graduate students, or help them market themselves,” Napolitano said. “Helping graduate students translate those skills to a recruiter in a private industry is something we can provide assistance on.”

Photo Courtesy of University of California Office of the President