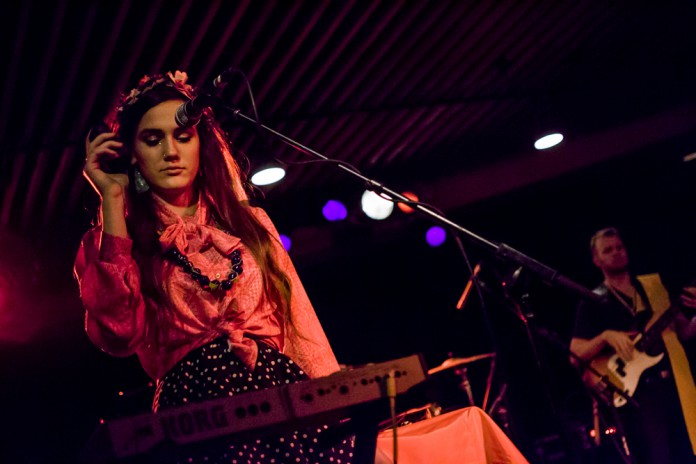 Students did not think twice before flocking to the Hub to listen to some alternative tunes on Friday, Jan. 24. Touring their 12th studio album, “Lousy with Sylvianbriar,” of Montreal performed at the University of California, Santa Barbara–and the night was one for the books.

The warm atmosphere of the sold-out show, presented by UCSB’s Associated Students Program Board, provided refuge from the chilly nighttime air, and good vibes radiated from the speakers, welcoming all who entered.

The band’s alternative-indie-rock sound juxtaposed with the youthful, urban scene set by the Hub made for a picturesque and radical night. White lights were strung along the UCen banisters, causing the multitude of faces in the audience to glow as they watched, sang, and danced amid the crowd, and I could hear numerous spectators singing along to songs they seemed to have known for years.

Wild Moccasins, the opening act, did not disappoint. While the band may have been more underground than of Montreal, not knowing the words to the songs did not keep the audience from enjoying the music. The majority of the songs were performed by lead singer Zahira Gutierrez, and the indie-pop sound was the perfect amalgamation of youthful angst and relatable recollections of love.

Despite the fact that the music was pleasant, only a handful of people, including myself, were dancing, and most members of the crowd seemed pretty bored. Regardless, I thoroughly enjoyed the performance, and I felt that Wild Moccasins was the perfect choice for an opening act because of the bold yet chill nature of their songs.

Of Montreal took the stage long after Wild Moccasins left the room, and I found myself shifting positions in the crowd in anticipation of their arrival. During concerts at larger venues, the gap in time between the opening act and the main performance gives the roadies time to set up. In this case, however, there was not much equipment to adjust onstage, and the seemingly unnecessary span of time caused some people to feel antsy and annoyed.

Finally, of Montreal entered a room filled with excitement–every member of the audience was cheering as the band began playing.

Quirky lead vocalist Kevin Barnes cracked many jokes, alluding to the unique and sometimes obscene lyrics of the band’s variety of songs. I noticed several fans thrashing to the music, and numerous others simply swayed back and forth in awe of the nearly flawless experience.

The band played for about an hour and a half, and though the vocals sounded just as good live as they do recorded, certain transitions between songs seemed to be more drawn out than necessary, and I often felt impatient waiting for a new song to begin. Nevertheless, this concert was among the best I have been to, and the unconventional lyrics and two crowd surfers, one of whom made it up to the Hub’s rafters, made the night worth it.

I was disappointed that of Montreal never played their most well-known song, “Wraith Pinned to the Mist and Other Games,” even after their encore; several fans, both long- and short-term, seemed to feel cheated when it was not performed. Nonetheless, the concert as a whole was possibly one of the most well-performed I have ever been to, and as of Montreal would profess, we’ll have to pretend we’re in Antarctica another day.