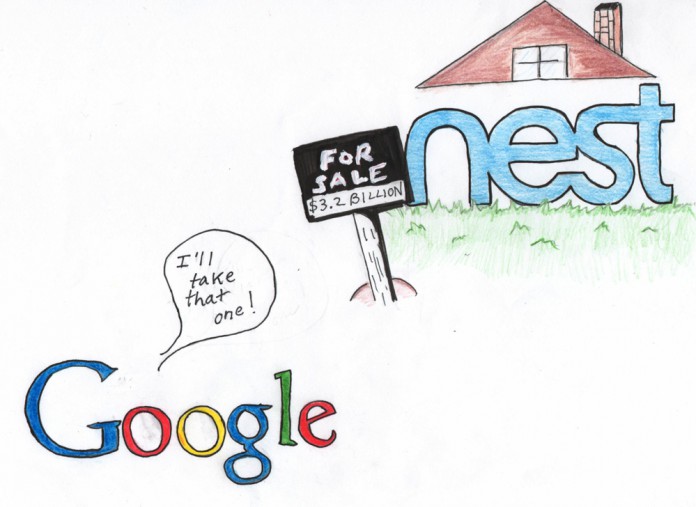 Remember that Disney Channel movie “Smart House”? The one where the family wins a super smart (and demented) computer house? Well, thanks to Google, that movie seems only slightly less ridiculous, maybe even remotely plausible. Google has purchased Nest, the home technologies company, for the staggering price of $3.2 billion. This purchase is Google’s second-largest acquisition ever, dwarfed only by Google’s $12.5 billion acquisition of Motorola Mobility.

Nest Labs is a technology company headquartered in Palo Alto, Calif., that specializes in home automation. The company was co-founded in 2010 by former Apple engineers Matt Rogers and Tony Fadell, who was one of the initial designers of Apple’s iPod. Since its humble beginnings, Nest has gained much fame in the home automation industry for their best selling Nest Learning Thermostat and Nest Protect smoke and carbon monoxide detectors. These devices are sensor-driven and Wi-Fi enabled, giving them the ability to “learn” your schedule and habits (like what times you leave and re-enter your home) as well as the ability to be controlled from your phone.

Nest’s success seems to be mostly on account of their incredibly smart product.

“When it comes down to it, no amount of marketing or fluff will sell something that people don’t genuinely want,” says third-year economics major and former Nest Labs intern Ned Tannenbaum. “It’s a company that’s made up of people, iPod and iPhone engineers, who know how to build things that people love.” Google has certainly taken note of this. Nest enters the Google family with an innovative product and team with “Apple-like user interface and experience.”

The acquisition of Nest was announced on Jan. 13, 2014 and has since sparked a great deal of buzz in the tech community. One important aspect of the acquisition is the immense price that Google is paying for Nest, surpassed only my Google’s purchase of Motorola. However, Google’s involvement with Nest is not exactly something new. Google Ventures, the venture capital investment division of Google Inc., has been investing millions of dollars in seed money to help Nest develop their sophisticated home automation software and hardware. But Google is not just paying over $3 billion for thermostats and smoke detectors; they are acquiring a team of genius designers who have a ton of experience with Nest’s sophisticated software.

However, Google will not be taking over control of the company’s operations; according to a Google press release, “Nest will continue to operate under the leadership of Tony Fadell and with its own distinct brand identity.” As for any new products currently in the works between Google and Nest, Nest co-founder Rogers states, “Nest’s product line obviously caught the attention of Google and I’m betting that there’s a lot of cool stuff we could do together, but nothing to share today.”

Privacy concerns surrounding Google’s handling of Nest customers’ information have been raised, as Google’s reputation for collecting user behavior information and selling that information to advertisers is no big secret. Nest’s software collects information about a customer’s habits inside their home and uses that information to help the thermostats “learn” a customer’s daily schedule. One big concern is that Google will use the data collected by Nest to target advertisements based on our behavior in our households, not just our behavior online. Nest’s privacy policy already limits how customer information is used, and Google has announced that it will continue to abide by this policy.

Privacy concerns aside, Google is making a major investment in the burgeoning field of smart home technologies. This comes after Google’s recent development of a “driverless” car and their purchase of Boston Dynamics, a company that specializes in making two- and four-legged robots that can run and walk with a sense of balance. In fact, over the past year Google has acquired high-tech companies like Holomni (robotic wheels), Makani Power (airborne wind turbines), Redwood Robotics (robot arms)—the list goes on and on. It’s hard to say whether or not Google is simply buying up these tech companies to compete with the likes of Apple, who does not seem to be as interested in purchasing high-tech robotics. Any speculation over what Google plans to do with all these robotic and smart home technologies would be just that: speculation. Google is investing in plenty of projects that may seem bizarre today, but might just be the norm in the near future.