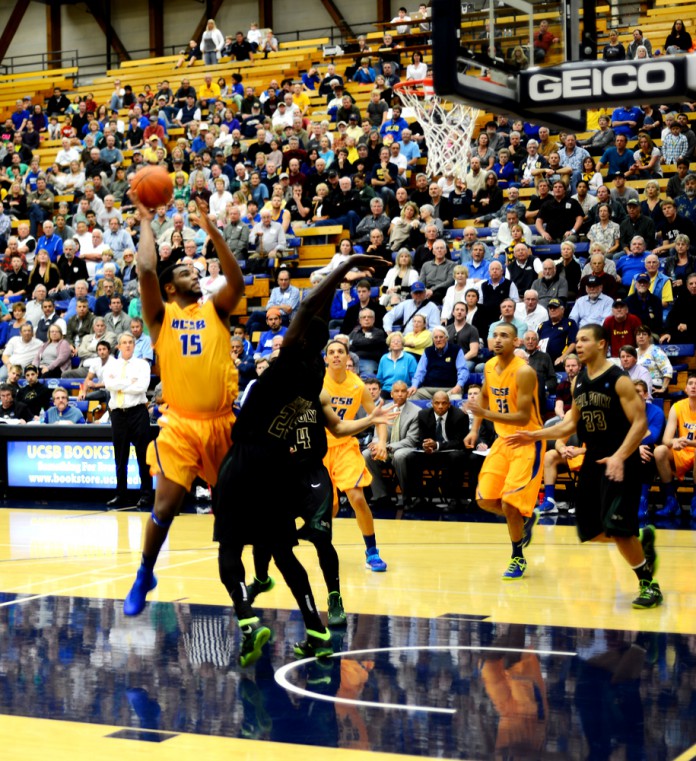 Cheers roared out of Gio’s from a chorus of alumni on Saturday before the University of California, Santa Barbara played rivals Cal Poly in the Thunderdome. The aptly named “Domecoming Weekend” brought dozens of alumni back to Isla Vista to reminisce about college life and cheer for the Gauchos. The alumni’s plan was to do the loop­ (get one drink at every bar in Isla Vista) and then walk to the Dome to watch the game. Alumni from all over California, and even a few from the East Coast, came back for the weekend.

Hanging out with the alumni gave me a much-needed history lesson on IV. For instance, snappa is a relatively new game; alumni who graduated in the ’90s had no idea what it was. And our much-loved soccer team has only been the focus of our sporting attention for a decade or so. Before that, the sport to watch was basketball. Ever wonder how the “Olé Olé” chant came to be? Reza Garajedaghi, UCSB graduating class of 1993 and one of the event organizers, recalls how the timeless soccer chant was brought to Santa Barbara. He and many other students traveled to Pasadena in 1994 to watch the World Cup Final.

“A bunch of us drove down to the game, it was the final between Italy and Brazil. There, the Brazilian fans all chanted ‘Olé Olé’ the entire game and pumped up their team, who eventually won,” stated Garajedaghi. “We brought it to the basketball games after that because we loved how it energized the atmosphere, and at first the players didn’t like it. ‘That’s a soccer chant,’ they told me after a game, ‘you can’t cheer that here.’ But the cheer was bigger than them, and it’s been part of UCSB for 20 years now.”

Ever been to UCSB soccer games and seen all the tortillas thrown onto the field by the Gaucho Locos? This tradition has also moved to Harder Stadium, but it had its humble beginnings in the Thunderdome. In fact, one alumni remembered going to a game in 1997 against University of Nevada, Las Vegas, a nationally televised game on ESPN. The loudspeaker rang out as tortillas flew: “If one more tortilla is thrown on the floor, head coach Jerry Pimm will be ejected.” Suddenly, a rainstorm of tortillas descended upon the court, followed by the referees ejecting Pimm from the game.

The atmosphere for the game on Saturday was met with the same raucous fan base from the same Gaucho Locos in the Thunderdome. Although the Gauchos lost to the Mustangs, the alumni were very nostalgic about their college homes, and cheered like crazy for the entire game. It seems that above all, going to UCSB taught them time management.

“You have to know how to party and how to work here, you become very good at managing them both,” said 2006 alum Mike Lipka.

Although a 7-Eleven has moved in and new apartments have replaced the Burger King, IV seems very unchanged. From graduates of ’91 to those of 2006, all seem to fondly look back on life in Isla Vista. And in case you were wondering, life after college suits the Gaucho alumni very well, especially when they come back to IV once a year to reminisce about life and cheer on their Gaucho sports.