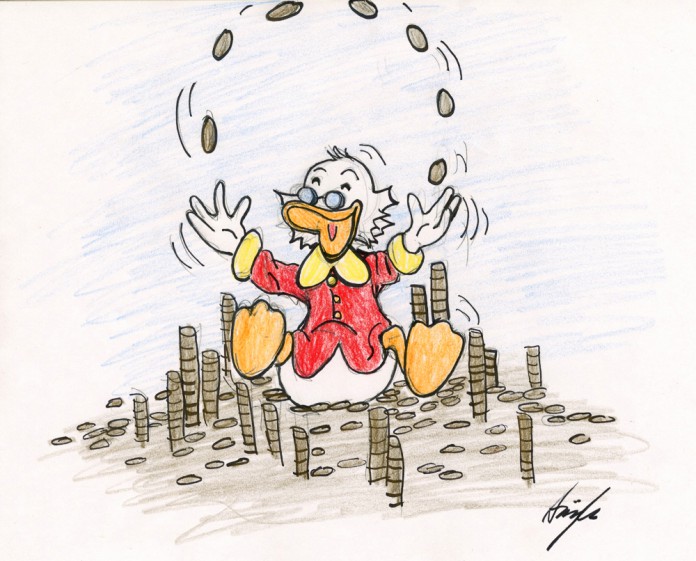 Users of the digital cryptocurrency Dogecoin have raised over $32,000 in an effort to get the Jamaican bobsled team to the Sochi Winter Olympics.

Following the meteoric rise and subsequent infamy of the digital currency Bitcoin, alternatives like Dogecoin have sprung up, helping to prove the popularity and potential of digital cryptocurrencies, as well as garner media attention for their users’ peculiar habits of philanthropy.

Cryptocurrency, the hot-topic for economists and investors alike, operates on the principles of decentralized, open-source technology, and near-unbreakable encryption methods. Unlike fiat currencies such as the U.S. dollar, cryptocurrency exists solely in the digital world and is invulnerable to inflation and the tinkering methods of centralized powers like the Federal Reserve. Its exchange is also decentralized; much like email, a cryptocurrency transfer happens between two parties, without the use of a middleman. Users of cryptocurrency hail the inherent benefits of the technology, which include security, ease of transaction, and, most notably, anonymity.

Not everyone is so pleased with the digital currency, however. Powerful entities such as China’s Central Bank have passed laws in resistance to Bitcoin and similar digital currencies, forbidding the country’s financial institutions from trading in it. Most recently, the Chinese version of Amazon, Alibaba, has banned the use of Bitcoin and related cryptocurrency in its ecommerce sites.

However, despite its government’s attempts to control its marketplaces, China still remains the largest exchange for cryptocurrency, helping to drive the value of one Bitcoin to around $1,000. Bitcoin has also made headlines in its connection with the digital black market website Silk Road, which has since been shut down. Due to the anonymous nature of Bitcoin, it was the payment method of choice for the Silk Road’s users, who could buy anything from illicit drugs to unregistered firearms via the site.

There are a few basic principles to cryptocurrency that can be similized to commodified precious metals like gold; essentially, it’s all about commodifying computing power. From the induction, and throughout the operation of a cryptocurrency standard like Bitcoin, there is a fixed cap of potential coins available, much like there is a fixed amount of gold on Earth. Also, like gold, Bitcoins enter the market via “mining”; however, instead of pick axes and dynamite, users mine for Bitcoins by using their computers to perform extremely complex math problems that ultimately result in the cracking of a unique code.

Once this code is cracked, the Bitcoin exists, ready to be stored in a “wallet” program, traded for goods and services, or even sold for fiat currency via exchanges such as Mt.Gox. Skeptics can rest assured in the security of the code as it utilizes a similar technology to online banking. A Bitcoin cannot be duplicated or tampered with, so counterfeiting is impossible, and each transaction is automatically verified by the user community.

With every new idea comes competition, and in an effort to reproduce the success of Bitcoin, as well as improve on the technology of cryptocurrency in general, alternatives such as Litecoin have been introduced. Dogecoin, however, has a rather unusual history. Named after the Internet meme Doge, a cute and flippant Shiba Inu dog, Dogecoin started out as joke but soon gained momentum. In an interview with Metro.us, founder Jackson Palmer said “Dogecoin started out as a simple tweet, which was me parodying the sheer number of altcoins [alternative cryptocurrencies] coming on the market. Shortly after I posted this, I took dogecoin.com live with a picture of the famous Doge meme photoshopped on a coin. Billy, my co-founder, got in touch with me a couple days later saying he’d turned it into a real thing and the rest is history.”

After qualifying for the Sochi Winter Olympics, Jamaican bobsledder Winston Watts told the Telegraph “in truth, we still don’t really know at the moment if we’d even have enough funds or sponsorship to fly to Sochi.” Led by the initiative of Reddit user Itchy_Craphole, the Dogecoin community saw an opportunity for good, and quickly became involved with the bobsled team’s fundraising efforts. Reddit user DarmokDoge followed Itchy_Craphole’s lead and helped to start a Twitter campaign with #dogesled, stating in a Reddit post that “sponsoring the Jamaican bobsled team would be the biggest thing we’ve [the Dogecoin community] done so far, and it would be an awesome cause.” Less than a week later, over $32,000 was raised in Dogecoin donations.

Its still unclear if cryptocurrency is the market of the future, but thanks to the enterprising generosity of the Dogecoin user-base, Jamaica once again has a bobsled team now–“such wow.”