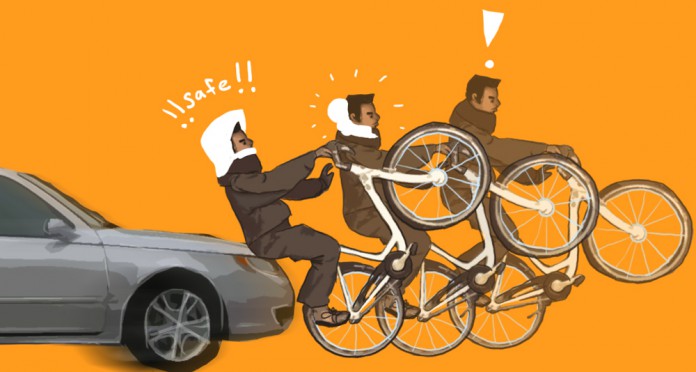 Two women in Sweden have developed a radical new form of the bike helmet—one that does not even cover the head until a fraction of a second before an impact. Anna Haupt and Terese Alstin’s product, called Hövding, is a collar worn around the neck that sits on the shoulders. When a bicyclist gets into an accident, a nylon airbag erupts from the back of the collar and surrounds the head and neck.

According to the company, also called Hövding, Haupt and Alstin began research in 2005 and recreated thousands of bike accidents on their way to perfecting the helmet’s design. With help from airbag manufacturer Alva Sweden, they developed a collar that contains a gas inflator which uses helium to deploy an airbag in a 10th of a second to cover almost the entire neck and head while leaving the person’s field of vision unobstructed. Once the device is inflated, the pressure in the airbag remains constant for several seconds before gradually deflating, allowing the head to withstand multiple impacts under its protection. For 10 seconds during the accident, a device inside the collar records data associated with the pattern of movement the rider experiences for further developmental work within the company.

In order to ensure the helmet responds only to real accidents, Hövding had to construct a precise algorithm for its sensors to follow. To detect “the typical motions involved in a bike crash,” reports TechCrunch, Hövding utilizes battery-powered gyroscopes and accelerometers that KiroTV says analyzes movement patterns 200 times every second. The battery can be recharged through a computer and is turned on by an on/off switch located on the zipper tag that is required to be zipped up fully in order to work.

According to NPR, a Swedish insurance company ran tests that found the Hövding system is at least three times better than a regular bike helmet at absorbing shock at typical urban bike-riding speeds.

“We don’t like, as designers, to have this attitude that it’s people who need to change, instead of the product that needs to change,” said Haupt. “And that’s why we decided to see if we could improve them.”

Much of the drive to develop such an innovate device originated in people’s aversion to the look and feel of a standard helmet. In response, Hövding is considerably less conspicuous and uncomfortable.

“Vanity might sound a bit stupid to talk about, but if that is the cause of people not protecting their heads in traffic, it is a real issue that you need to address,” said Alstin.

Despite the hours of refinement and fine-tuned technology that went into the helmet’s production, it can only withstand a single crash and cannot protect a wearer against something that does not trigger its sensors, such as an object falling onto a wearer’s head from above. Additionally, it is only available in Europe at the price of €399, or about $535.

In the United States, according to the Insurance Institute for Highway Safety, cyclists constitute 2 percent of all motor vehicle crash deaths, and 84 percent of those are adults 20 and older. However, in no state are adults legally required to wear helmets, and part of Haupt and Alstin’s goal is to encourage helmet use with their safer, more comfortable, and better looking product. Before it can be introduced into the U.S., however, it must receive approval from the Consumer Product Safety Commission.