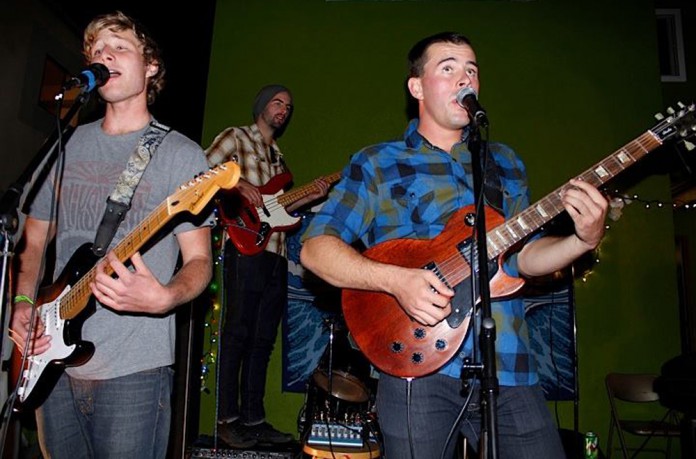 By hosting concerts in his Biko room, Electro-house DJ and University of California, Santa Barbara graduate Steve Aoki was able to utilize his very own living space in Isla Vista to start off his career. Since Aoki, the IV music scene has flourished, and on Saturday, Nov. 23, the Dashain co-op house held their “Chill Vibes” event, also known as “Sunset at Dashain,” to highlight up-and-coming IV artists the Sun Daes, Yonder, and The Olè’s.

Sun Daes opened up the show with their indie rock beats and got the crowd jamming along with them. The band’s style can be compared to that of Real Estate and The Growlers, with vocals similar to those of the Arctic Monkeys. The group members consist of Max Goldenstein (guitar and vocals), Gabe Poissant (guitar and vocals), JD Severino (bass), and Jared Payzant (drums), all of whom are UCSB second-years. The band members met their freshman year while living in the Santa Catalina residence hall, better known as “FT.” Sun Daes’ surfer rock style has great energy that makes you want to hear more.

“We prefer playing IV shows over Goleta shows,” said lead singer Goldenstein, explaining that the crowd in IV has better vibes. Playing shows locally allows for more students to come out and support the boys than playing out in Goleta or Santa Barbara does.

They debuted their latest song, called “Title.” Although the Sun Daes have not been established that long, the group definitely has made use of their time together, and with two more years ahead of them, they are bound to only get better.

Yonder, a more folksy band, switched things up with their mellow beats. Yonder is made up of Erisy Watt (guitar and vocals), Jeremy Ferrera (guitar), Elliott Wobler (bass), and Scott Pritchet (drums). Lead singer Watt has a beautifully raspy tone to her voice, making the band’s style very distinct. They compare their style to that of Bob Dylan, who also has a rock and folksy-like tone to his music. The group has played shows at SOhO in downtown Santa Barbara and around Goleta.

Yonder’s music makes you feel as if you have stepped into a coffee shop. With the combination of Watt’s soothing vocals and the talent of the rest of the band, their overall performance did not fail to keep the crowd bobbing their heads along to each song.

Closing the event was the well known reggae and hip hop band The Olè’s. The Olè’s, who have been together for three years, is made up of Matthew Tweed (guitar and vocals), Cole Leksan (guitar and vocals), Luke Murpha (piano), Aaron Brennan (bass), and Eric Lorden (drums). This past Saturday, The Olè’s debuted two additional members, Nicholas Marks (trumpet) and Dominick Burnham (trombone), adding to the band’s punchy and aggressive sound. Like the Sun Daes, The Olè’s also met during their time living in FT.

The Olè’s are often compared to bands like Iration, Rebelution, and Sublime. These boys are certainly a band to look out for, and band manger Dom Degrassi said that he and will be starting a record label titled Co-Lab Records, along with Yonder and five other bands, and that The Olè’s were recently rated by ReverbNation as Goleta’s number one reggae band.

“The Olè’s are one of the best bands for sure, because they always have great energy,” said third-year communication major Hope Kim. It’s clear that this group has developed a fan base around the community and are putting in work for their music, performing live on KCSB Radio earlier on Saturday.

Their cover of Atmosphere’s “Sunshine” was a proper way to start the crowd’s Saturday night, and the group’s eclectic sound closed off the show nicely with 2Pac’s “California Love.”

All the bands, each very different in style, provided a variety of sounds that seemed to meet the music taste of almost every individual. Support these local artists of IV while they’re up-and-coming, because you never know when you’ll be in the presence of the next Steve Aoki.