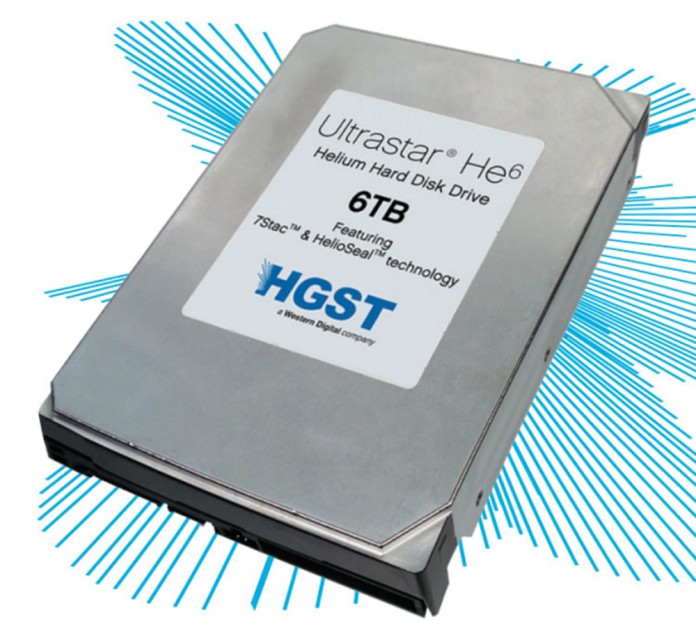 Unlike existing hard drives, which aren’t sealed, the Ultrastar He6 encloses spinning disk plates inside an airtight chamber filled with helium rather than air. Though current hard drives filter out contaminants, normal air, which is dense, turbulent, and corrosive, still manages to rush in and create massive resistance, as well as escalate energy consumption and limit the maximum rpm.

Just as a balloon would quickly deflate as helium gas is released, a helium-powered hard drive would become obsolete if the helium were to escape from the chamber. However, developers at HGST were able to completely seal in the helium, though they have not released any details of how they managed to do this.

“People have constantly talked about the advantages of helium but haven’t been able to make it work because it escapes the enclosure over time,” said Frank Talke, a professor at the Jacobs School of Engineering at the University of California, San Diego, according to the MIT Technology Review.

Because the Ultrastar He6 uses helium, turbulence and resistance are both greatly reduced. Helium has one-seventh the density of air, which allows for more platters, denser tracks on the platters, a greater spin on the platters, an increase in the hard drive’s capacity, and an overall lower consumption of power and waste heat in data centers. In their new product, Western Digital and HGST have increased the maximum number of platters from five to seven, maximized the hard drive’s capacity to 6TB versus 4TB in current models, and reduced the overall power consumption, with a 23 percent lower idle power and 49 percent lower power used per terabyte ratio, according to the company.

Such innovation is very useful when space is an essential factor – big data centers are needed with more data capacity and lower power consumption. Incorporating helium improves the overall efficiency and capacity of hard drives.

Despite the current shortage of helium in the world, HGST stated that the helium it would be using in its products would cost very little per drive.

“As we will not be a big consumer of helium, our requirements will have little incremental impact on the overall worldwide demand for helium,” said Brendan Collins, vice president of Enterprise Storage at HGST. “The incremental parts costs and capital costs of assembly tooling for the helium-filled drives are more significant but manageable enabling us to deliver a compelling $/GB and watts/GB advantage over air.”

The Ultrastar He6 holds a promising future for data storage, opening many new doors in the world of technology.

“HGST’s helium platform will serve as the main platform for new technologies like shingled magnetic recording (SMR) and heat-assisted magnetic recording (HAMR) where HGST will continue to push the HDD areal density envelope,” said Western Digital in a press release. “The helium platform will also serve as the future building block for new, growing market segments such as cold storage, a space that HGST plans to address over the next couple of years.”