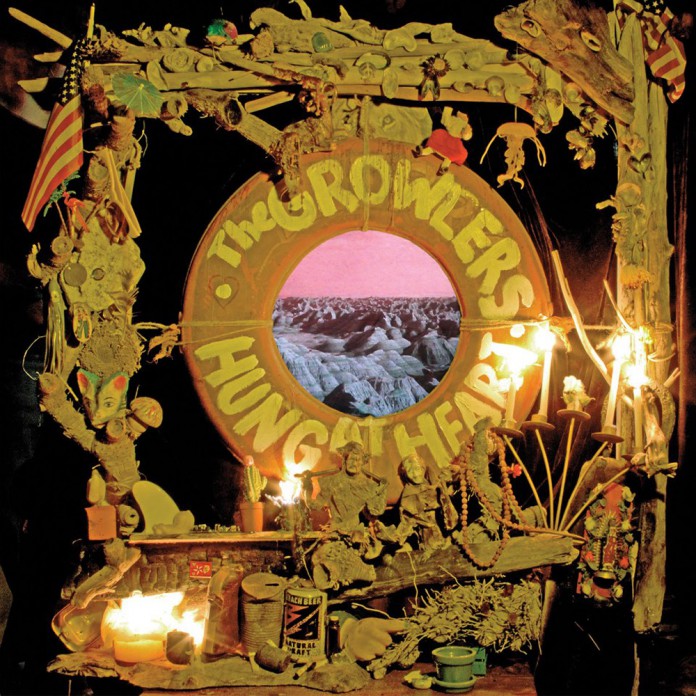 The Growlers’ new EP, “Gilded Pleasures/Not Psych,” is a nine-song compilation of intoxicating, laid-back surf rock—a perfect accompaniment to the nighttime lapping of ocean waves. From the caterwauling, reverb-soaked opener, “Dogheart II,” to the introverted tidal glimmer of “Nobody Owns You,” “Gilded Pleasures” hovers around your head like a shimmering, but ultimately transient, hallucination.

The Growlers roll in like a coral-crusted Merry Pranksters from the first echoing chord. But their dazzling sonic veneer disguises an opaque and no-bullshit lyrical abstraction that is rife with aphorisms, testaments to love, and lessons of living well. On the traipsing luau groove of “Tell It How It Is,” singer Brooks Nielsen speaks to the internal absolution of an outcast—“Its alright, tell ‘em how it is / Even though it don’t make you popular / Sometimes you gotta be a dick / You don’t have to roll over…”

The Growlers’ greatest strength in this EP is their undeniable authenticity. Each song encapsulates a personality that a listener can project into reality. The kaleidoscopic range of songs, even those telling stories of fictional characters, conveys prescient and genuine themes.

The EP’s alternate title, “Not Psych,” may also be a comment on the persistent categorization of The Growlers’ sound as psychedelic. This attribution is difficult to ignore, but to the band’s eclectic credit, they continue an exploration into the sounds of outlaw country as well as rhythm and blues.

Nielsen and lead guitarist Matt Taylor are like the bohemian heritage of Robert Gordon and Link Wray. The vocals of both musical pairs complement the music and vice versa, but unlike the 1970s rockabilly duo, The Growlers are a band. With additional members Kyle Straka on guitar and organ, Anthony “Anstonio69” Perry on bass, and Scott Montoya on drums, The Growlers’ sound is complete.

On “Ego of Man,” a submerging riff is the undercurrent to Nielsen’s sentiment, “We only want to be free / As funny as it sounds / It’s all we want.” “Hiding Under Covers” and “Pretend I’m Gay” are emotive vindications that flit between melancholy and revelry, while “Humdrum Blues” is a ballad on difficult relationships that builds on a thumping beat.

The twanging “Ol’ Rat Face” employs ethereal twinkles of organ and wobbling distortion, while on the subterranean “Change in Your Veins,” Nielsen sings, “Take a risk and feel some pain / put some change inside your veins.”

The title “Gilded Pleasures” jabs at the notion that an ostentatious composition equates to a successful product. With no space for inventive interludes, the whole EP clocks in at less than a half hour. Though devoid of an expansive diversity in mood and experimentation from song to song, each song is abbreviated to a tight and direct composition. The EP plays like a snapshot capturing a moment in time, and that’s all anyone is ever left with—fleeting but glittering memories gilded in gold.