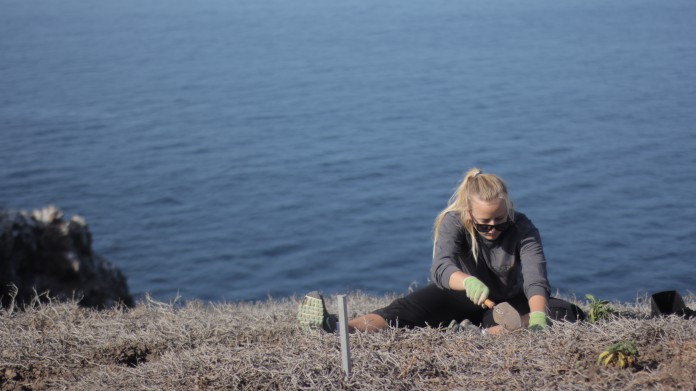 Located just 11 miles off the California coast is Anacapa Island, a paradisal haven to a multitude of plant and animal species. This remote island is the smallest of the four Channel Islands—the other three being Santa Cruz, Santa Rosa, and San Miguel—and is just six miles from one end to the other. Even though from a distance Anacapa seems like an oasis, it is currently undergoing major ecological restoration by selfless volunteers from different areas in Southern California, including the University of California, Santa Barbara.

On Sunday, Nov. 17, the Community Affairs Board (CAB) at UCSB headed an excursion to Anacapa Island in hopes of creating environmental awareness by working to remove the ice plant, an invasive species that has been detrimental to the preexisting habitats of the species on the island.

In order to perform this restoration project, CAB had to recruit a sufficient amount of volunteers, and the application process was far from easy.

“CAB had online applications in which over 100 people applied for,” said Paonessa. “It was my job to then select the 14 most enthusiastic and eager candidates based on the applications.”

One of the accepted volunteers, Megan O’Beirne, was so thrilled to be part of such an impactful project.

“With [15] people doing a day’s worth of work, I think we can really make a dent in this project,” said O’Beirne. “Obviously, total restoration cannot be accomplished in one day, but everyone on this trip (including myself) probably volunteered because they felt they could make a difference.”

O’Beirne became involved with CAB because she is an Environmental Studies major, and she was interested in volunteering to restore the ecology of Anacapa Island because she loves “the notion of reintroduction of native species in order to return a region to its original state. I am very interested to see how we as humans can step in and undo what we believe to be the ‘harmful’ things that nature has done to itself.”

O’Beirne is one of the handful of students chosen by Paonessa to be part of this project. Though she just became the Environmental Coordinator this fall quarter, Paonessa has been interested in the environment since before she came to UCSB.

“Last year was my first year at UCSB and I immediately fell in love with the beautiful surrounding environment and nature,” said Paonessa. “I wanted to be involved in the environmental movement on campus (which influenced the world’s first Earth Day in 1970 after the 1969 oil spill in Santa Barbara). I became involved with CAB’s environmental events last year and became the Environmental Intern Spring Quarter.”

The excursion lasted from Sunday morning to evening, and Paonessa, as well as the other volunteers, wanted to do this project to “help out with the ongoing restoration project on Anacapa Island in hopes that one day the island will be back to its original habitat.

Overall, the trip was a success.

“We planted about 250 plants during our time on the island,” said Paonessa. “All of the volunteers were happy with how the trip turned out and were grateful for the opportunity… I think there is a major possibility that CAB will do this project again.”