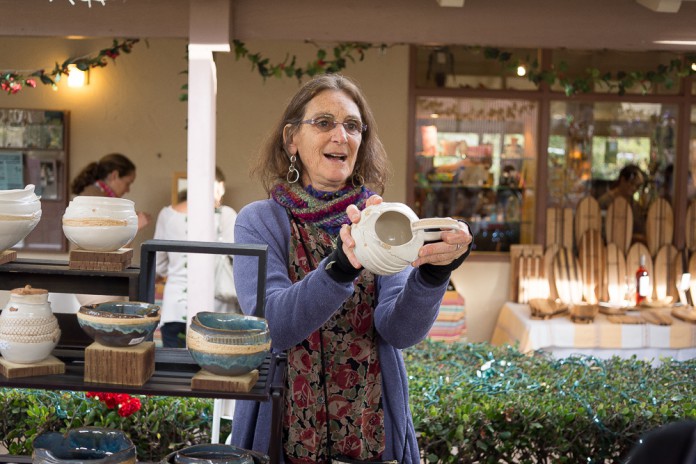 Tucked away in the hills of Santa Barbara is a place comparable only to Narnia. On an autumnal November morning—when the sky was covered with alabaster clouds and the leaves on every tree were a vibrant green—I strolled blissfully through the Santa Barbara Botanic Garden and observed as various vendors sold their handcrafted gifts. Walking down the narrow path, I couldn’t help but hum Christmas tunes. As I took in in the delightful scene, full of holiday cheer, it would not have taken much to make me believe in Santa Claus again.

For 20 years, the Santa Barbara Botanic Garden has hosted an annual Holiday Marketplace, allowing vendors from all over Southern California to sell their handmade crafts. This year’s event was held on Nov. 23 and 24 from 10 a.m. to 4 p.m., and featured gifts for people of all ages, from colorful bamboo scarves to personalized ornaments. All proceeds were collected to support the Santa Barbara Botanic Garden General Fund.

At the Marketplace entrance, visitors were greeted with warm smiles and complementary cookies generously donated by Marmalade Cafe, located on State Street in Santa Barbara. On the right side of the path was a table full of free gift bags provided by the Waldorf School of Santa Barbara. The table was headed by 12-year-old students, who grinned from ear to ear each time somebody chose to donate a few dollars to their education.

As I continued down cobblestones lined on both sides with vendors, I came upon the Garden’s library, and walked through the open French doors to see twinkling icicle lights dangling from the beams of the room’s high-peaked ceiling. The warmth of the room gave refuge to visitors who’s noses had been nipped at by Jack Frost one too many times. Books filled the shelves from floor to ceiling, and artisans cheerfully greeted each guest who entered.

One of the craftspeople, Lois Sattler, an artist specializing in ceramics from Marina Del Rey, has been selling her one-of-a-kind jewelry at the Holiday Marketplace for three years, and she keeps coming back because of her love for the people. She uses precious metal clay to make pendants of various sizes; after the clay is fired in a kiln, the binder melts away and metals such as silver, gold, and copper remain. Sattler’s methodic artistry has always been of interest to Marketplace visitors, and she loves having the opportunity to talk to them at the event.

“Selling makes people happy,” said Sattler. Sattler, whose unique artwork can be seen at her portfolio on TheArtCommission.com, said her favorite thing about selling her jewelry at the Holiday Marketplace is meeting people.

One of the most sociable artisans was John Scott from Carpinteria. His pots, vases, and bowls were among the most unique pieces displayed at the Marketplace.

“I’ve been a potter since the ’60s, which is a bit before your time,” said Scott. “After you throw a pot, you pull gently at the rim. It gives it this floral look.”

Each of Scott’s pieces is incredibly durable, and I watched him, wide-eyed, as he held a vase from its delicate rim and hit it against the table.

While a majority of the vendors at the event were selling jewelry and pottery, Auntie Lala’s Sweet Petites was among the few local businesses who came to the Marketplace to sell sweet treats, including delectable peppermint bark and hot chocolate mix creatively gifted inside mason jars.

Those who were unable to attend the Holiday Marketplace should be sure to attend next year, for this joyous occasion will continue to spread love for many years to come.