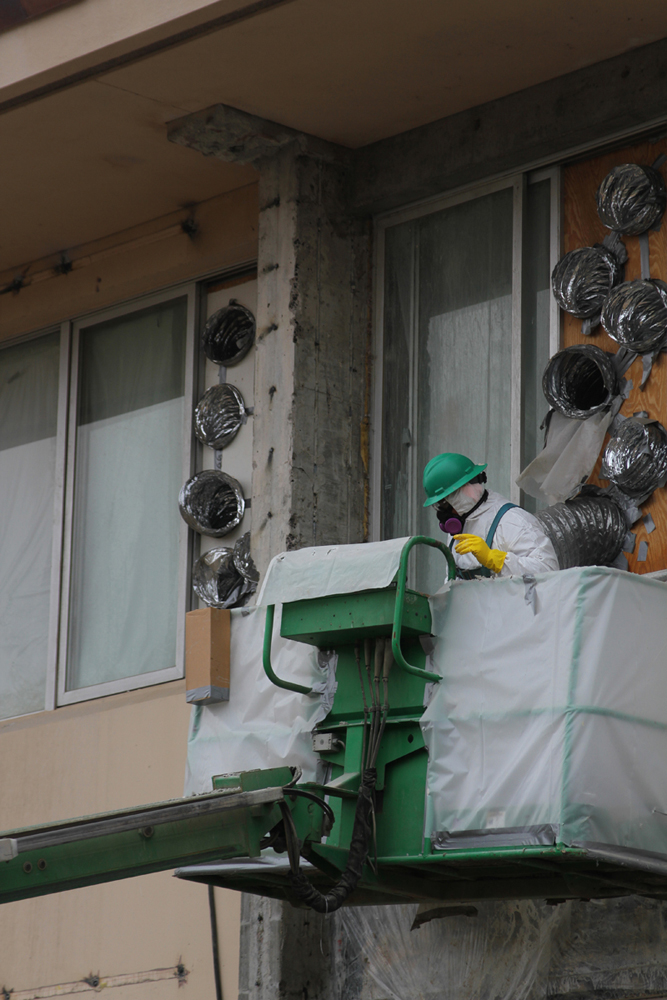 It’s been 20 years since the inception of an idea: to create a library with the resources needed to meet student demands. In August 2013, construction finally commenced on building an addition to Davidson Library and redesigning part of the existing library. The project is expected to take two and a half years to complete.

Davidson Library was first built in the 1950s. Back then, it was just a two-story building; now, it’s being “gutted,” which means that the inside of it is going to be knocked apart, all while keeping the exterior of the building intact.

About 35 years ago, an eight-story addition was built. Currently, a new three-story addition is being constructed, which has led to some student complaints regarding the noise.

Phase one includes digging 50-foot holes into the ground and drilling holes into the existing parts of the library to raise the foundation and to ensure the seismic safety of the building. Metzger also mentioned that fire-safety rules and regulations that must be observed.

According to Metzger, they are trying to keep noise down to minimize the disturbance of studying students. They cannot stop construction during finals week, however, because of financial reasons and the delay in construction, but the University Center will be opening study areas during finals week.

“During finals week, the record [number of students in the library] was 800 students at 2 a.m.,” Metzger said. “It drops off precipitously after 2 a.m.”

The UCen will be expanding its study loft to open up a total number of 350 seats. Because the library’s night-time hours are really only used to their maximum benefit until 2 a.m. and the actual number of students pulling all-nighters is relatively low, the needs of students should be accommodated successfully.

“We made a commitment…there are going to be problems,” Metzger said, referring to the noise and space issues that some students may experience. “We are trying to be as open and transparent [with the construction process] as possible.”

With construction, a new “paseo”—a walkway to connect all three parts of the library—will be built.

“You’ll be able to see the mountains and the ocean,” Metzger said, referring to the inspiring view that is planned.

In addition, the old Music Library will be moved to the renovated two-story building.

“It’ll be great to have everything under one roof,” Metzger said, and pointed out that on other campuses, it is inconvenient to trek to another library in search of a certain reference book.

There will also be more study-spaces and gathering areas throughout all three areas.

The library is greatly concerned with student needs, and sympathizes with the inconveniences that construction puts students through.

“We’re giving out free earplugs,” Metzger said, and mentioned that even furniture selection will take into account student tastes.

Overall, the noisy construction work will have to be tolerated.