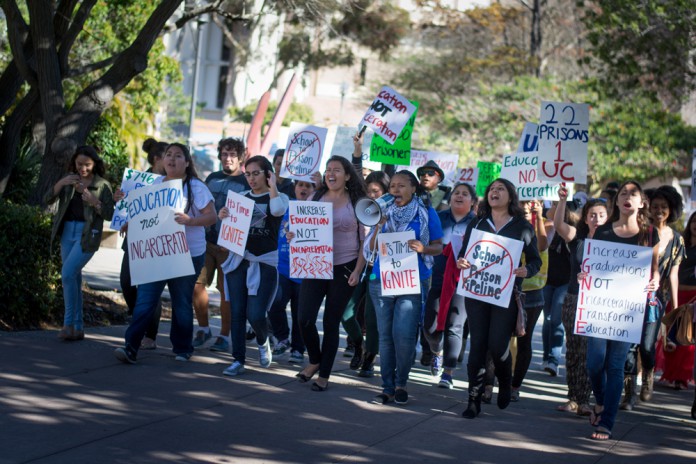 To kick off the IGNITE Week of Action, several students put on a “die-in” at the Arbor on Monday, Nov. 18. The demonstration, entitled “The Death of Higher Education,” aimed to depict how the current higher education system in California is flawed.

IGNITE, which stands for “Invest in Graduation Not Incarceration, Transform Education,” is a statewide campaign designed to raise awareness about the effects of the disinvestment in education by the state of California and to create more racial and ethnic diversity on UC campuses. The campaign calls on the UC system to invest in education rather than in prisons.

“Public education used to be free, but now we’re paying thousands of dollars in tuition,” said second-year sociology major Mohsin Mirza, member of the IGNITE committee. “This is a direct result of the state of California disinvesting in education and investing in the mass incarceration of communities of color instead. So today, we’re seeing increased prison spending, decreased school spending, and increasing tuition, all of which are important issues that IGNITE is hoping to raise awareness about this week.”

Students who volunteered to lie on the ground had phrases written in red paint on their arms to show the things that they believed had “died” in higher education, such as “diversity” and the “California Master Plan.” The California Master Plan for Higher Education outlined certain ideals that were to be the standard for education, such as free tuition and accessibility to all. Those putting on the IGNITE Week of Action events believe that this vision has been lost.

“I hope this UC-wide campaign can bring changes to the university and force administration to value diversity more and do things like put more people of color on staff and bring more students of color to campuses,” said first-year communication major Anumita Kaur. “In its current state, the UC does not represent me.”

Students had also written statistics on their body, like “22 prisons, one university,” which was short for how 22 prisons have been built in in the last decade in California but only one university has been made in the same time.

The action in the Arbor drew attention from students who were passing by as they stopped to see what the action was about. The IGNITE committee used this opportunity to explain their cause and get people to sign petitions in support of IGNITE.

On the night of Tuesday, Nov. 19, IGNITE put on another event in the Multicultural Theatre by screening the biopic, “Fruitvale Station,” based on the 2009 BART shooting of Oscar Grant by police. The film was screened as part of the IGNITE Week of Action due to how the story of Grant shows the criminalization, racial profiling, and police brutality many black men face on a daily basis.