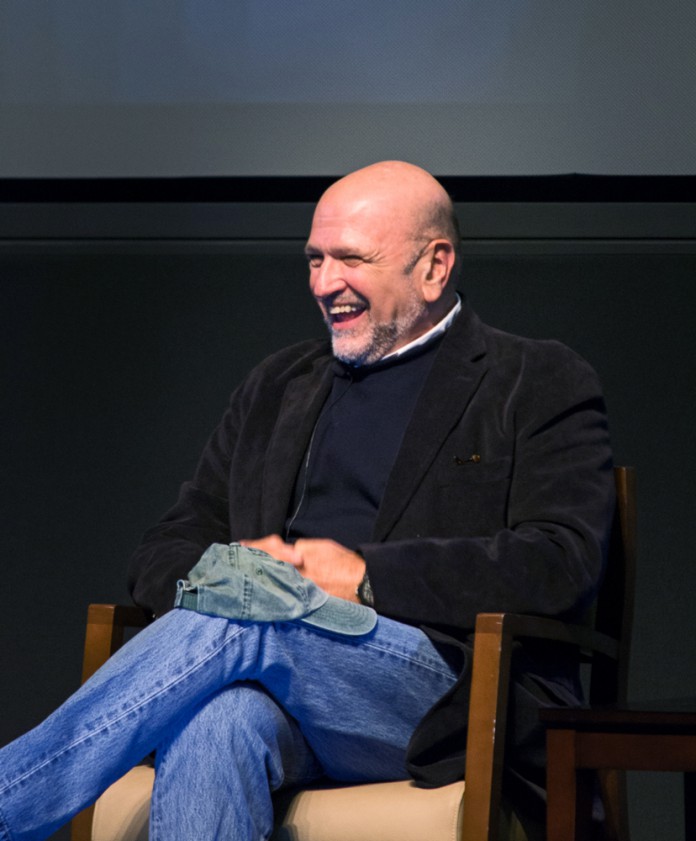 Presented by the University of California, Santa Barbara’s Carsey-Wolf Center, celebrated cinematographer and director Haskell Wexler visited Pollock Theater on Nov. 21 for a Q&A after the screening of his 1969 classic documentary-style drama “Medium Cool.” In a discussion moderated by UCSB’s Department of Film and Media Studies’ doctoral candidate Greg Burris, Wexler was also joined by friend and fellow filmmaker Andrew Davis (“The Fugitive”) to discuss the film’s lasting relevance and its depiction of late 1960s protest culture.

“Medium Cool” follows the professional and personal life of John Cassellis (Robert Forster), a TV news cameraman whose personal work philosophy is to shoot, film, and record circumstances. John’s job becomes much more difficult in the wave of public outcry over the Vietnam War during the late 1960s. John films a monologue of verbal attacks by black power protesters on the media’s racism, gets fired after objecting to turn over that footage to the FBI, and meets Vietnam War widow Eileen (Verna Bloom). While John and Eileen are looking for Eileen’s son, the two witness the violent riots surrounding the 1968 Democratic Convention in Chicago. It’s in the wake of this violence that John starts to realize the political power that a cameraman has in filming important political and social movements, especially in a business obsessed with recording any sensational, gory incident for the sake of ratings.

“Medium Cool” gains much of its authenticity from Wexler’s use of cinéma vérité, talking heads, and techniques that capture both the fictional and nonfictional. The images of the protests in which John and Eileen find themselves are actual footages of the 1968 Chicago Riots, immersing the viewer in real uprising and police brutality. The film’s visceral depiction of 1960s political protest, poverty, inequality, and violence explores social themes that are still very relevant today. The portrayal and documentation of late-’60s protest culture and its lasting relevance were topics of much discussion during the Q&A.

When asked about the current state of American protest culture, and how we as a nation can revive the spirit and passion of protest that we had in the ’60s, Andrew Davis was quick to answer: “Reinstitute the draft.” Davis, who served as an assistant cameraman on “Medium Cool,” was referring to the way the Vietnam War draft affected public opinion toward the war, and how so much of the anger about the war was sparked by the draft’s effect on the vast majority of the population.

“We’ve all been seduced so long since ‘68 to say that Washington and the military know what’s best…and it gets confusing [while] we’re all just trying to earn a living and have a life,” said Wexler, critiquing the role of politics in the news media. Wexler argued that the public should feel free enough to question the way our government is portrayed on the news and in the media in general.

The conversation then turned to comparing the protest culture of the 60s to that of today. So much of today’s protest culture revolves around economic issues and the large gap between the wealthy and the poor.

“In ’68, money didn’t seem to matter at all.” said Davis, “People gave each other rides, you can sleep on someone’s floor, money didn’t seem that important. Everyone was broke.” Much of the anger was targeted at the government for violating human rights, not because of economic differences. To provide perspective, Davis sighted how his tuition as an undergraduate at the University of Illinois was $270 a semester and getting a job was not a problem. Today, the cost of education, and living in general, has grown immensely. These factors greatly contribute to the rise of protest, but they do not come close to the draft’s impact on the public.

“The draft got everybody involved in the war, and it brought it home to many more people. And because there are so few jobs today, you have kids going into the military, because they have no other options or they want to pay for school.” Davis argues that the state of the economy today and young Americans’ reliance on the military has led to less resistance and passion for protest.

Other topics of discussion included the Edward Snowden controversy, the 50th anniversary of President Kennedy’s assassination, and Wexler’s admiration for documentary films.

Wexler made sure to leave some advice for young filmmakers in the audience, saying that the duty of filmmakers and storytellers is to lift the curtain on our government and expose corruption and oppression. Regarding the commercialization of the news media, Wexler told the audience, “You filmmakers and storytellers have to go outside the conventional media, to go out with your cameras and your storytelling to break that barrier. Otherwise, we go towards more militarization and more oppression of the people.”