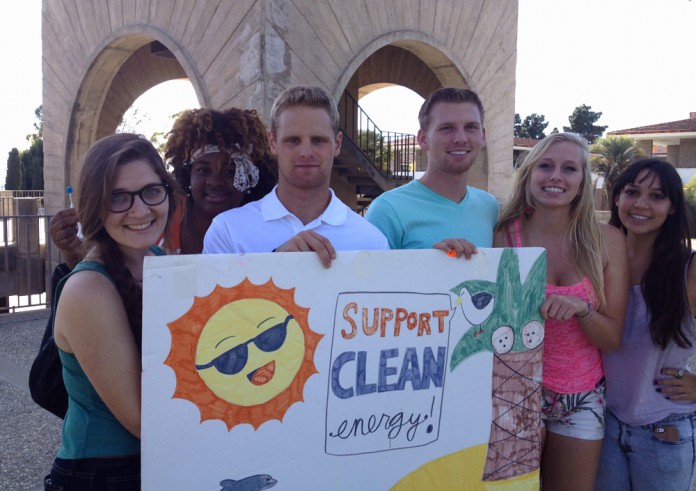 Lined up in front of Storke Tower on Nov. 6, 2013, were six eco-friendly cars, brought onto campus by the California Public Interest Research Group, or CALPIRG. The cars ranged from an electric Smart Car to an Audi A6 that runs electrically or on diesel fuel, which burns more efficiently than gasoline and thus emits less pollutants into the air we breathe. This event is part of CALPIRG’s Million Cars Global Warming Campaign, intended to show Gov. Jerry Brown that many students support him statewide in passing the million car legislation.

“This legislature would make zero-emission vehicles and higher miles per gallon vehicles more affordable and more available for low-income families,” said Lia Nelson, second-year environmental studies major and co-coordinator of the Million Cars Global Warming Campaign. “It would also create a rebate program that would be tax-deductible.”

CALPIRG is a statewide student-run nonprofit group. There are a total of 10 chapters of CALPIRG inside the University of California system. This organization is a public group that surveys what UC students find important, so that they can act on those issues.

The organization takes on about eight to 10 different campaigns every year. At the moment they have six different campaigns, involving causes that range from protecting the oceans to ending hunger and homelessness. The Million Cars Global Warming Campaign was one of the concerns brought forth by the students of California.

CALPIRG organized the clean car show in order to have an eye-catching event where people could go and learn about fuel-efficient vehicles and get visibility for their organization. The money CALPIRG obtains from pledges goes to events such as these.

“This money is then used to hire professional staff to lobby for us in Sacramento and Washington D.C. on public issues that students want,” stated Elijah Baker, a first-year political science major. By presenting these clean cars, members of CALPIRG were able to explain how they hope to flood Brown with petitions showing that students support clean energy and reducing California’s carbon pollution.

The cars that were showcased run on cleaner gas and are 100 percent electric, and are thus used mostly for in-town traveling.

“The main reason to consider one of the eco-friendly cars would be to save money,” said Baker. “Yes, it costs a little to charge your vehicle, but it’s estimated that each car will save about $11,000 on gas yearly.”

The Million Cars Global Warming Campaign was originally brought forth because members discovered that California is the 12th largest emitter of carbon pollution in the world.

“[CALPIRG] works hard so in the future, we can use California as a model to show states and countries across the globe what measures can and need to be taken in order to lower their carbon footprints,” said Baker.