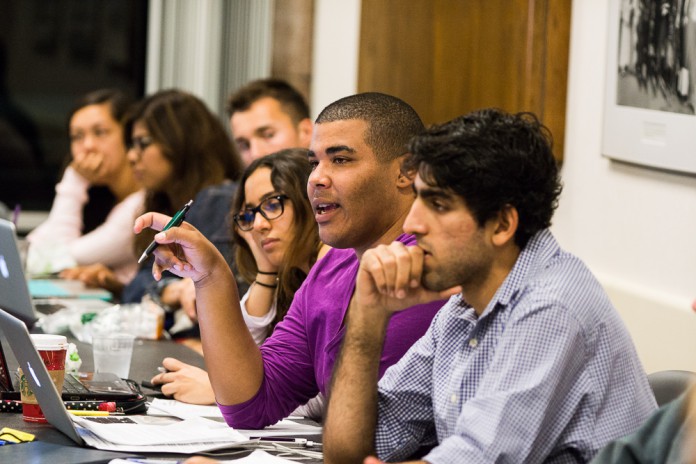 “A Resolution to Provide Assistance” approves the creation of the UCSB Typhoon Haiyan Fundraising Initiative, which will raise up to $5,000 per period during two individual collection periods. The funds raised will be matched by Associated Students funds and given to the National Alliance for Filipino Concerns as aid to those affected by the Nov. 8 disaster. The initiative will be organized by resolution authors Off-Campus Sen. Beatrice Contreras and On-Campus Sen. Nikki Calderon.

“There is a precedent for fundraising for disasters like this, created by Senate in 2012 for [Superstorm] Sandy and [Legislative] Council in 2010,” Contreras said.

The resolution, which originally called for a single two-week collection period beginning immediately after its passage as well as a matched amount of up to $25,000, was amended after concerns were raised regarding the effectiveness of fundraising so close to the end of the quarter as well as the impossibility of matching the amount requested with Senate funds. As passed, the resolution will allow for a collection period at the end of fall quarter and an additional period at the end of winter quarter.

Former Associated Students member and University of California, Santa Barbara alum Marjan Riazi, whose family was directly affected by the tragedy, emphasized in her testimony during public forum that the initiative need not worry about immediacy with regard to the donation.

“This is not a process that will end anytime soon,” Riazi said. “Money coming at any point in time is money that they can use.”

“A Resolution to Support the Creation of a New Master Plan for the Higher Education for the State of California” declares support by Associated Students of the formation of a survey committee to draft an updated California Master Plan for “quality, accessible, and affordable education.” The committee would comprise students and faculty affiliated with California higher education as well as government officials and others who would dedicate themselves to wholly re-envisioning the plan for the first time since 1960.

“We’d be the first people in a long time to be making this statement,” Abboud said. “It’s really important that ASUCSB is ahead of the curve.”

“A Resolution to Support UCSB Employees” was proposed in conjunction with the wishes of the UCSB Student-Worker Coalition (SWC) to obtain Senate support in time for an all-day strike by American Federation of State, County, and Municipal Employees 3299 (AFSCME) on Wednesday, Nov. 20. UC workers represented by AFSCME 3299 will stage the strike as a means of protesting the unsatisfactory terms of their contracts with the UC system, which they claim are inferior to those of their private-sector counterparts.

According to Jacqueline Partida, organizer for SWC, a failed Nov. 1 flash mob staged by students in the on-campus dining commons serves as a prominent example of the intimidation faced by workers who attempt to stand up for themselves. The flash mob, which served to support the same cause as the impending strike, was forcefully shut down almost before it had begun.

“If this is how they treat their students, how is management treating the workers?” Partida said.

Though the resolution was tabled due to requests made by senators for more specific numerical figures pertaining to the workers’ pensions, discussion will reopen at Senate’s Nov. 20 meeting.