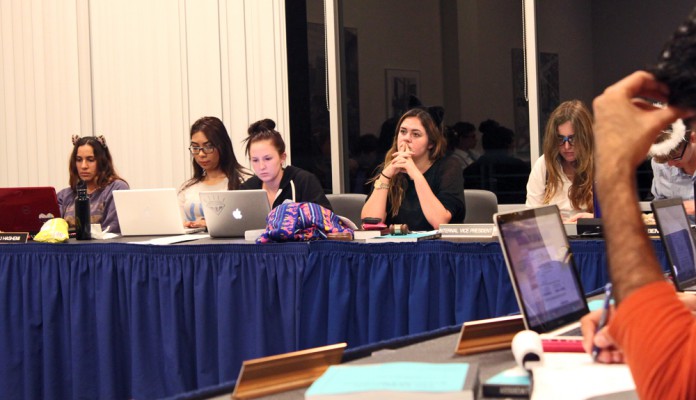 Associated Students Senate reopened discussion of “A Bill To Improve the Visibility of On-Campus Senators” and passed a motion regarding the reconsideration of Finance Board funding the Non-Traditional Students Association during the Senate meeting on Wednesday, Oct. 30.

Josh Plotke, the association’s founder and former vice president, spoke during public forum about his concerns that the funds allocated to “Casino Night,” an event to be put on by the Non-Traditional Center, were excessive and based on misleading information. He stated that the association board member who approached Finance Board did so without first obtaining a vote from fellow board members and that in his request, he claimed that the association deserved the funds because three-fourths of the student body is considered “non-traditional.”

“This has never been a definition our club has used; instead, the purpose of the club has really always been to serve a tight minority of students on campus who are older,” Plotke said.

This population, Plotke said, consists of a group of about 275 students who are 25 years or older. He expressed worry that because the event’s expected attendance is in actuality lower than what was expressed to Finance Board, the funds allocated will prove to have been unnecessary. He decided to intervene in order to prevent potential distrust by Finance Board of similar requests in the future.

The Senate ultimately passed a motion by On-Campus Sen. John Soriano for Senate liaisons to present the issue at the Nov. 4 Finance Board meeting.

“A Bill To Improve the Visibility of On-Campus Senators,” if passed, would allow on-campus senators to table in the dining commons and thereby interact more regularly and directly with their constituents. Because author On-Campus Sen. Andrew Neiman was not in attendance, the Senate voted to table the bill as they had the two preceding meetings.

Off-Campus Sen. Derek Wakefield expressed concerns that the director of the dining commons had demonstrated disapproval of the idea in a conversation recounted to him by Neiman. She allegedly felt uncomfortable with the idea of reserving a table for such a cause, and Wakefield stated that it might be hasty to move forward with a plan still surrounded by such uncertainties.

“I think to pass it now would be a really unwise idea, because it may end up backfiring,” Wakefield said. “We [may] pass it and then not be able to actually do it.”

The Senate will once again convene on the bill at its next meeting on Wednesday, Nov. 6.