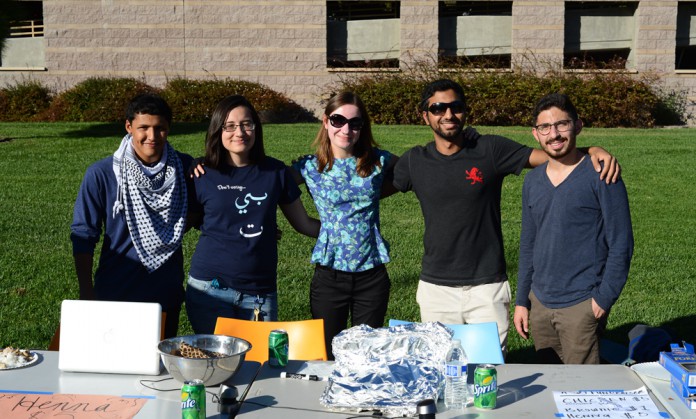 As a part of Humyn Rights Week, the Arab Student Group held a fundraiser for Syrian refugees through the sale of homemade Middle Eastern food and henna tattoos on the Lot 22 lawn on Thursday, Nov. 14. The proceeds will go through the Moroccan organization Les Rangs d’Honneur.

Arab Student Group (ASG) co-president Bayanne Mina Alrawi said that the group hoped to raise $800 to $900 through the event. This would top last year’s total of $600, a figure that had been impeded by higher food production costs. By making their own food this year, the members of ASG hope to generate more proceeds for an organization that Alrawi cites as highly effective in its philanthropic efforts.

“We came to this organization because 100 percent of the proceeds that we’re going to send them [will] go directly to helping the refugees,” Alrawi said. “They have a very specific and calculated way to track where our money goes, so we know exactly what we’re doing.”

Les Rangs d’Honneur, originally founded in remote parts of Morocco, is composed of doctors and surgeons who have cultivated the ability to practice surgery in under-equipped areas by turning trucks and local schools into “mini-hospitals.” The group is a private association that operates without the help of state institutions or public funding.

The project to aid Syrian refugees will be implemented in Turkish and Jordanian camps, where it can be ensured that the money will be allocated solely to those fleeing ethnic conflict within their home country. ASG historian and co-treasurer Sarah Alami believes Les Rangs d’Honneur will be the most reliable means of achieving this goal.

“They didn’t want to go to Syria itself because the situation is dangerous there to begin with, and also because they don’t know where the money [would] be given,” Alami said. “We have no political stance.”

Both Alrawi and Alami feel confident knowing that they will be able to trace exactly where the ASG donation will be allocated, and that Les Rangs d’Honneur will provide them with feedback about its effect. ASG plans to hold another fundraiser for the Syrian cause sometime during the spring.