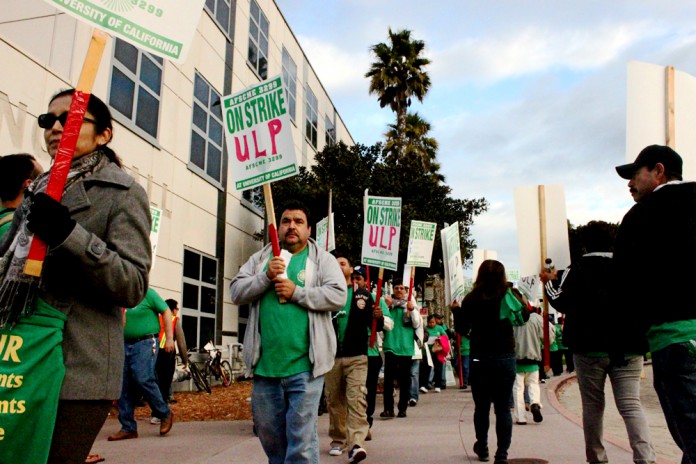 All the University of California campuses and medical centers witnessed strikes on Wednesday, Nov. 20, by American Federation of State, County and Municipal Employees (AFSCME), Local 3299.

According to the press release, “The Strike stems from a coordinated campaign of illegal intimidation, coercion, and threats against UC Patient Care and Service Workers who participated in a two day walkout back in May over unsafe staffing levels at taxpayer supported UC hospitals—which posted record profits just this week.”

AFSCME 3299 President Kathryn Lybarger, in a submission to UC Los Angeles’s Daily Bruin, said, “For the past 18 months, patient care and service workers have negotiated in good faith, seeking to secure a long term contract with the UC.”

Earlier this year, however, negotiations broke down, with roughly 40 contract articles at issue. UC patient care and service workers are currently working without a contact.

“On 19 of those issues…AFSCME 3299 has withdrawn its proposals…to encourage UC administrators to move on our priority issue: safe staffing,” said Lybarger.

Lybarger also said, “We gave the UC exactly what it wanted—forcing low-wage workers, UC students and patients to subsidize multimillion dollar payouts for the UC’s highest-paid administrators…with hopes of encouraging the UC administrators to move on our priority issue of safe staffing…even though fully 99 percent of UC service workers are income eligible for some form of public assistance.”

According to Lybarger, one in 10 service workers get hurt on the job. That number is 20 percent higher than it was in 2009.

As a result of these conditions and the lack of concern shown on UC’s part regarding safety issues, several UC patient care workers walked off their jobs for two days in May. UC’s response was to illegally intimidate these workers to prevent them from striking. In wake of the UC’s actions, California’s Public Employment Relations Board (PERB) has charged the UC with “illegal intimidation and coercion of Patient Care and Service workers during the first-ever Strike of UC Hospitals.”

It was shortly after PERB’s aforementioned decision that AFSCME 3299 called for Unfair Labor Practice Strike Vote, and its members authorized the strike with 96 percent support.

“A UPL strike is the only way to even the playing filed and hold UC accountable for attacking the rights of its devoted career workers,” Lybarger said in an AFSCME 3299 release.

The UC Office of the President denies the workers’ allegations.

“[The Strike] is completely inappropriate and unfair to the people we are here to serve,” a release from the Office said. “Today’s strike is not about unfair labor practice, it’s about the union’s refusal to compromise.”

“We urge AFSCME to show more flexibility,” Klein said. “We proposed several packages that included significant movement on wages, pension, health care benefits, and other issues that are important to the union. AFSCME rejected all of these offers.”

On the day of the strike itself, a group of union workers and supporters gathered at 6 a.m. at the East Gate of UC Santa Barbara’s campus and marched from there to Storke Tower. At around 1 p.m., the group rallied from Storke Tower to Ortega Dining Commons. The rally returned to Storke Tower afterward and stayed there for the majority of the day to garner support for UC patient care and service workers.

Several people showed up to express their support for the AFSCME workers, including a representative from the office of Assemblyman Das Williams, who could not attend the event, and Cathy Murillo, a former UCSB student and worker and current Santa Barbara city council member.

Daraka Larimore-Hall, secretary of the California Democrats and a former officer in UAW Local 2865 (the UC student-workers union), also gave a short but powerful speech in support of the strike. He voiced the often-heard complaint that a taxpayer-funded University should not be spending hundreds of thousands on union-busters.

The strike also had the support of Robert Ackerman, the current chair for UAW 2865 at Santa Barbara. UAW 2865 is “the union of over 13,000 student-workers across the University of California system, including TAs, GSIs, Readers, and both undergraduate and graduate members.”

Members of UAW 2865 were striking in solidarity with AFSCME 3299.

“We thought it was the right thing to do, [that] it was the only thing conscionable,” Ackerman said. “An injury to one is an injury to all. I hope that university management is seeing what’s happening here and listening to all our voices.”

While AFSCME 3299 is battling with the UC over contracts, the focus of Wednesday’s strike was to establish the importance of workers’ rights and to prevent any further infringement upon these constitutional rights.

“This strike is not about the wages and benefits,” AFSCME Southern California Coordinator Ching Lee said. “This strike is about the unfair labor practice—the way the university is threatening and intimidating workers when they want to assert their right to go on strike.”

According to Lee, during the last strike the University called the workers and asked the workers individually about their intention to strike.

“That’s intimidation,” Lee said. “We want to make sure our workers rights are protected.”