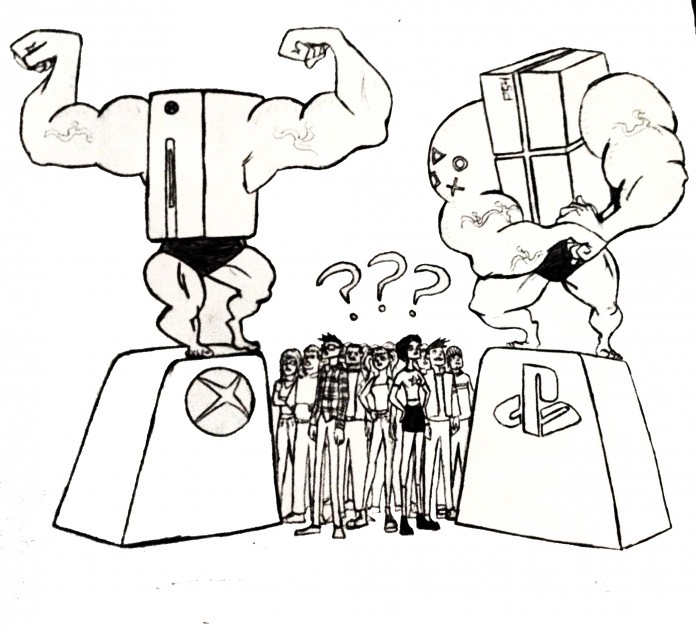 The next generation of gaming consoles is fast approaching. Sony and Microsoft will each release their highly anticipated consoles, the Playstation 4 and the Xbox One, in November. These two consoles will join Nintendo’s Wii U as what will most likely be the biggest products of this holiday season, and with every new generation of consoles comes the retail war. This is the eighth cycle, and it’s shaping up to be a brutal one. Fans and critics have been debating for months: which console will win in this upcoming generation?

This new generation brings much to the table, with processing power and memory storage that beats out their predecessors as much as 16 times over. Sony’s PS4 and Microsoft’s Xbox One will both feature 8-core CPUs (Central Processing Units), an upgrade from the Playstation 3 and Xbox 360’s 7-core and 3-core processors, respectively. Since the CPU computes all of a game’s motion, enemy AI, and physics, this more powerful processor will allow for more NPCs (Non-Player Characters) to be on-screen at a given time. This in turn means more lively, populated game environments.

The GPU (Graphics Processing Unit) for each console will be greatly improved as well. The PS4 will run on an AMD Radeon Graphics Core, with a peak throughput of 1.84 TeraFLOPS (FLOPS are the standard measure of computer performance) per second, compared to the PS3’s peak of 1.80 TeraFLOPS per second. The Xbox One will also feature an AMD Radeon GPU; however, it will only operate at 1.31 TeraFLOPS. More powerful GPUs allow games to render faster and at higher resolutions, and it will be noticeable in things such as more realistic water ripples, reflections, and lighting effects. Higher resolution character models will make people in the game look near photorealistic, with a greater level of detail added to their faces and clothes that would not be noticeable in this current generation.

Both consoles will feature memory storage systems that are up to 16 times more powerful than those of their predecessors. The PS4 and Xbox One will both feature 8GB of RAM, compared to the PS3 and Xbox 360’s memory of 256 MB and 512 MB, respectively. RAM (Random Access Memory) allows stored data to be accessed in any random order, while other forms of memory types, such as CDs and DVDs, can only access data in a predetermined order. Increased RAM allows games to run more smoothly, which in turn means less lag and frame rate drops.

Where does the Wii U fit into all of this? Released in November of 2012, Nintendo’s Wii U has since sold a low 3.61 million units. Compare this to the Wii, which has just edged over 100 million lifetime sales in seven years, outselling both the PS3 and the Xbox 360, which have sold about 77 million units each. It’s difficult to classify the Wii U as “next-gen” since it has one-fourth the RAM of the upcoming PS4 and Xbox One, a little over one-fourth the processing power, and a little over half the graphical capability. In addition, the Wii U’s 8GB of storage doesn’t come close to the PS4 and Xbox One’s 500GB hard drives.

Along with a cheaper price point, however, the Wii U offers several features its competitors do not. One of these features is backwards compatibility, which allows users to play Wii discs on the system. The PS4 and Xbox One will not support PS3 and Xbox 360 discs, leaving their online marketplaces as the only option for playing past games. Additionally, access to online gameplay on the Wii U is free, while PS4 and Xbox One users need a paid subscription to either PS Plus or Xbox Live Gold.

The Playstation 4 hits shelves in North America on Nov. 15 and in Europe on Nov. 29 at a price point of $399.99. The Xbox One will be released worldwide in the middle of those two dates, on Nov. 22, for $499.99. The Wii U, meanwhile, sits below those two prices at $349.99. The console war is intense in every generation, and only time will tell which one will win the battle. Objectively, the PS4 seems to have the technical edge on this one, but it remains to be seen if developers will be able to harness all of its power. Stay tuned this holiday season to see which one comes out on top.