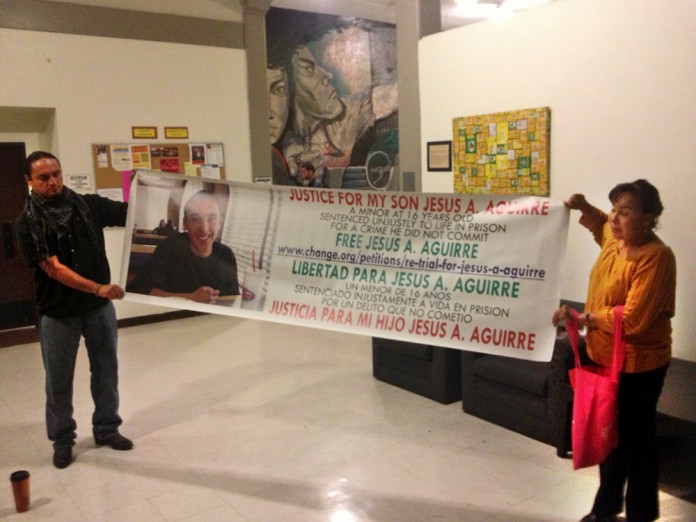 A Forum for a Safer Santa Barbara posed a controversial question on Thursday, Oct. 24, to over 100 students, families, and activists gathered at La Casa de La Raza: The Cesar Chavez Center: How will a Gang Injunction impact our community? The predominantly Hispanic crowd paid rapt attention to the speakers of People Organizing for the Defense and Equal Rights of Santa Barbara Youth (PODER), often applauding toward allegations of prejudice by the Santa Barbara Police and lawmakers.

In an informational PowerPoint presentation, PODER identified as a grassroots volunteer organization of “students, parents, laborers, and professionals from diverse ethnic, income, gender, age, and educational backgrounds” dedicated to social justice and community empowerment. The speakers, including PODER leaders, local students and community activists, were given 10 minutes with the microphone. The crowd was also asked to provide personal testimonials with a “Public Safety Survey” prepared by PODER.

“This is the first time I’ve seen family, students, educators, and professionals really come out and listen to what’s going on in their community,” said Nayra Pacheco, PODER member and a fourth-year history of public policy major at University of California, Santa Barbara. “I think that’s really impacting.”

Many of the PODER speakers identified their opposition to the gang injunction in multiple circumstances. They claimed it “does not address the root cause of the problem” and serves instead to “promote incarceration, violate everyone’s civil rights and…is based on racial profiling.” PODER also asserted that the injunction labels individuals as gang members for life — even if they’ve renounced any affiliation — and promotes the gentrification of primarily Hispanic neighborhoods.

On the day of the event, the Santa Barbara News Press published an Opinion piece by Mayor Helene Schneider entitled “Details on City’s Proposed Gang Injunction.”

In the Op-Ed, Mayor Schneider expressed her disappointment “that this legal process has taken so long, as the wait to determine whether or not there will be an injunction has only led to confusion and the spread of misinformation.”

She mentioned her offense at “claims by some that at-risk youth services have been sacrificed in order to pursue the gang injunction.”

And she even further asserts in her piece that “No one other than these 30 adults will be subject to the injunction,” but Brandon Morse, a political activist and participant in many local Republican organizations, pointed to a passage in the injunction’s text which specifies 30 individuals plus 300 unnamed John Does.

Morse claimed at the Forum that the law’s wording meant, “anyone is a potential John Doe.”

The Gang Injunction is a civil lawsuit that prevents the “nuisance” of certain individuals congregating together in specified zones dividing up Santa Barbara. PODER argued that individuals would be in violation of the law even by simply attending school, or incidentally occupying the same space as another “gang member.” Since the injunction is a civil law, the defendant does not have a right to a jury trial, but only prosecution through a judge.

“We are a community here,” said Francisco “Chavo” Robero of PODER Oxnard. “What this comes down to is the suspension of rights in specific target zones — rights of due process, association, and freedom of movement are at the core of what an injunction does.”

Chelsea Lancaster, an Extended Opportunity Programs and Services (EOPS) student program advisor at SBCC added in disbelief, “half the people on that list are my students.”

“One of those listed on the injunction is a single mother of two, studying Chicano studies, with a 3.2 GPA,” Lancaster said. “These kids are making a genuine, good faith effort to do good things with their lives.”

PODER’s proposed alternatives to the gang injunction included mentorship and reentry programs, a Citizen’s police review board, and increased community collaboration. The Forum was a powerful representation of community activism, but also functioned as a pulpit for political officials.

“Unfortunately, ‘justice’ in this country now means ‘just us,’” said Scoles. “I think it’s sickening that we don’t have more programs for kids.

Santa Barbara City Councilmember Cathy Murillo didn’t speak publicly at the forum, but listened intently through the entire two-and-a-half presentation at the front row dais. She did, however, express her opposition to the punitive aspects of the gang injunction.

“Why don’t we fix their problems and help them become law-abiding members of society?” Murillo said. “We want them to go to school. We want them to be successful. I don’t give up on our young people. I believe that, given some help, that they can stay out of street life.”