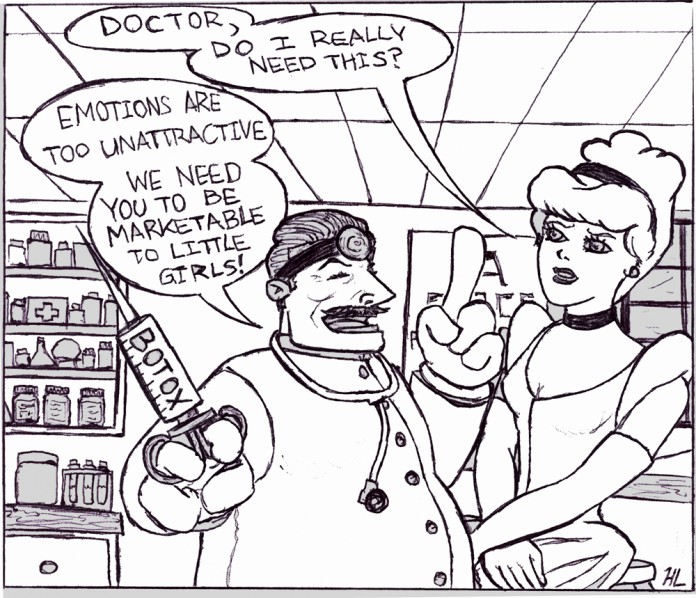 With a new movie in the works and a couple of spunky new princesses to love, Disney is well on their way to releasing another classic with their new movie, “Frozen.” But the movie’s head animator, Lino Disalvo, raised a few eyebrows in an interview he gave to the website Fan Voice in which he talked about the process of animating the film. He said, “Animating female characters are really, really difficult, ’cause they have to go through these range of emotions, but they’re very, very — you have to keep them pretty.” According to Hsin-Yu Huang of Humbolt State University, there is evidence to back up the first part of Disalvo’s statement; women actually are more facially expressive than men. But why do we have to “keep them pretty”? Was that a problem for the male characters too? Not according to the interview.

The idea of keeping women in film “pretty” seems to be less of a trend and more of a rule. The only Disney women who are not stereotypically pretty are the villains. Interestingly, this rule does not carry over to the men of Disney. The Genie from “Aladdin,” King Fergus from “Brave,” the dwarfs from “Snow White,” and countless others are examples of lovable male characters who are not designed to be attractive. And it’s not just the colorful sidekick characters that are allowed to be ugly. The male main characters of “Up,” “Ratatouille,” and “The Hunchback of Notre-Dame” are all designed to be physically unappealing.

It seems that the message here is that if you are a woman who is not stereotypically attractive, then your story is not worth being told.

But wait! What about Merida? She is the spunky redhead who stars in “Brave,” whose fiery frizzy locks and normal sized waist set her apart from her physically perfect princess counterparts. But right before her induction into Disney princess-ship, Merida was given, what Huffington Post calls “a traditional Disney makeover…featuring a slim waist, and doe eyes.” With hair no longer frizzy and a thinner shape, the new Merida now sits neatly into the category of traditional Disney princess.

Not only does Merida look different from her royal peers, but her story arc is also different: her tale does not end with her falling in love. Although it is true that many of the ladies of Disney are motivated by wants and needs other than falling in love with a man, they all manage to snag a hot prince charming by the end of their film. All except Merida. The implication here, between Disalvo’s comments and Merida’s conspicuous singleness, is that a woman’s lovability comes from the perceived perfection of her looks.

If Belle can fall in love with the Beast, why is it such a huge stretch for Prince Charming to fall in love with an average looking girl? The search for physical perfection in women on screen mirrors women’s search for perfection in themselves. Maybe the reason we can’t love an ugly princess is that women don’t want to identify with an imperfect character: we don’t want to admit to ourselves that the search for physical perfection isn’t worth the blood, sweat, and tears we put into it.