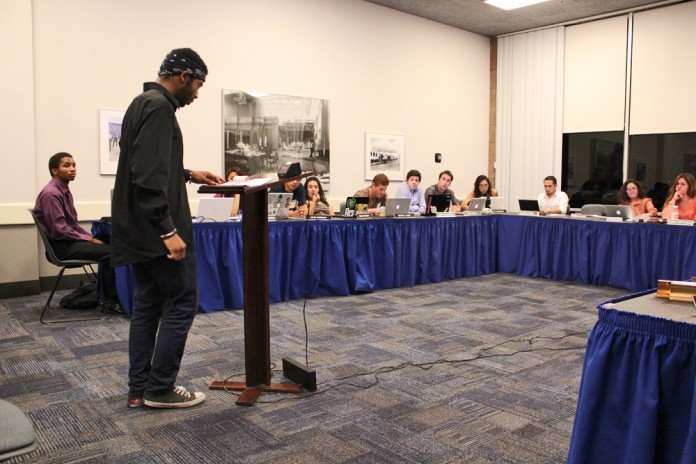 Associated Students Senate tabled “A Bill to Improve the Visibility of On-Campus Senators” and passed “A Group Project to Look into Updating the Legal Code Resolution” during its meeting on Wednesday, Oct. 16.

The Senate decided to table for a week “A Bill to Improve the Visibility of On-Campus Senators,” which would give senators the option to hold office hours in the Dining Commons in addition to the ones they already hold in the AS Main and RHA offices.

“[Constituents] can tell us what they want over lunch or dinner, and it’s more casual and easier to find [than the AS Main and RHA offices],” said On-Campus Sen. Andrew Neiman, author of the bill.

“I would really appreciate it if we tabled this for a week so it can then be an official thing,” said On-Campus Sen. Nikki Calderon.

In their discussion, the senators considered certain problems related to the Dining Services Team. Anticipated problems included whether senators holding office hours in the Dining Commons would be considered tabling and if the dining commons, specifically Dining Director Jill Horst, would be okay with Neiman’s idea.

In that same meeting, an ad hoc committee was created to perform the task of overhauling the Legal Code.

The ad hoc committee, thus, will work with Abboud to update the Legal Code, in a manner that improves the efficiency of the AS mode of operation. One of the aims of this group is to “assess how Associated Students can be better organized and work more cohesively and unified as an organization.”

The ad hoc committee had its first meeting on Monday, Oct. 14, following Abboud’s suggestion that they meet before the third AS Senate meeting on Oct. 16. Next, they attended a BCC Chair Council meeting on Friday, Oct. 18, to get input from BCCs.

Before the meeting adjourned, Theus gave one final remark to the Senate.

“I definitely recommend everyone getting involved in this process,” Theus said. “It’s going to, obviously, change a lot of Associated Students if it does happen, so definitely look over it, get in any questions, comments, or concerns. Especially concerns.”