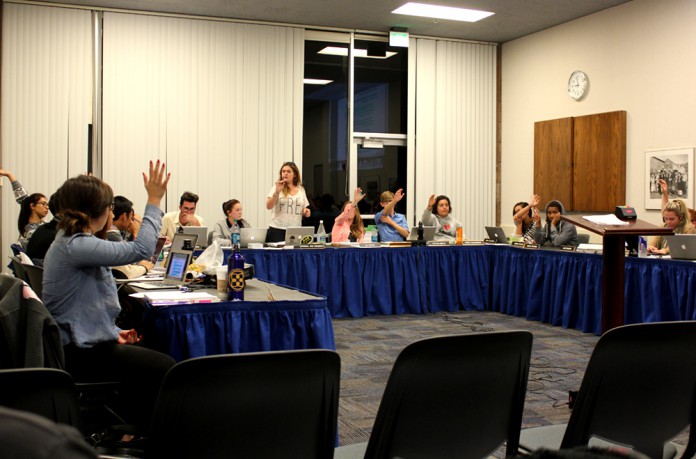 During the Associated Students Senate Meeting on Wednesday, Oct. 23, Senate tabled “A Resolution Backing the Undocumented Community and Demands to UC System” and passed both “A Resolution in Support of Lighting on the Lagoon” and “A Resolution to Fund the On-Campus Senator Forum, ‘Turkey Talk.’”

The first resolution seeks to address concerns that have persisted after the Senate’s failure to pass “A Resolution in Support of Undocumented Students and Immigrant Communities,” which included a contentious “no confidence” clause regarding University of California President Janet Napolitano that prevented it from receiving necessary votes.

The new resolution, authored by On-Campus Sens. Nikki Calderon and John Pena-Soriano, was received with some criticism, even from those who supported the original failed resolution regarding Napolitano and the concerns of marginalized groups. Off-Campus Sen. Beatrice Contreras, who co-authored the earlier resolution, cited some of the new resolution’s content as misleading.

“There were some additions to the resolution that were very unclear,” Contreras said. “Not all of those demands came from [other] UC campuses; there were some that came just from our campus. So that was kind of unclear.”

Other senators expressed feelings of hesitation as well, pointing out flaws in language and structure. One prevailing cause for uncertainty among the senators was the lack of support for the resolution via public forum, which had been an influential factor in the Oct. 9 discussion of the initial Napolitano resolution.

Eventually Calderon motioned to table the resolution, an action that Collegiate Sen. Ali Guthy and On-Campus Sen. Colton Bentz endorsed. It was ultimately decided that the resolution would be tabled and discussed again at the next meeting.

“A Resolution in Support of Lighting on the Lagoon” was authored by On-Campus Sen. Kimia Hashemian as part of her continued effort to implement more light fixtures alongside the lagoon for purposes of student safety. Its passing will allow her to continue the process of working with the administration to put her plan into action.

“That area is well-traveled at night, so [it would be] nice to have increased lighting and security there,” Guthy said.

The passage of “A Resolution to Fund the On-Campus Senator Forum, ‘Turkey Talk,’” also authored by Hashemian, will allow the on-campus senators the monetary resources to hold their public forum “Turkey Talk” as a means of reaching out to their constituents. The event will take place on Monday, Nov. 18, at Santa Rosa Hall.

“Any and every on campus resident is encouraged to come to talk with us about any concerns they have, or how to get involved, or what projects they might want to work on,” Hashemian said.

When Senate reconvenes on Wednesday, Oct. 30, to discuss “A Resolution Backing the Undocumented Community and Demands to UC System,” Contreras hopes to see more support vocalized by those the resolution would be benefitting.

“If people come back in and say they’d like me to do this, I’d probably vote yes,” Contreras said. “I mean I’d like to vote yes.”