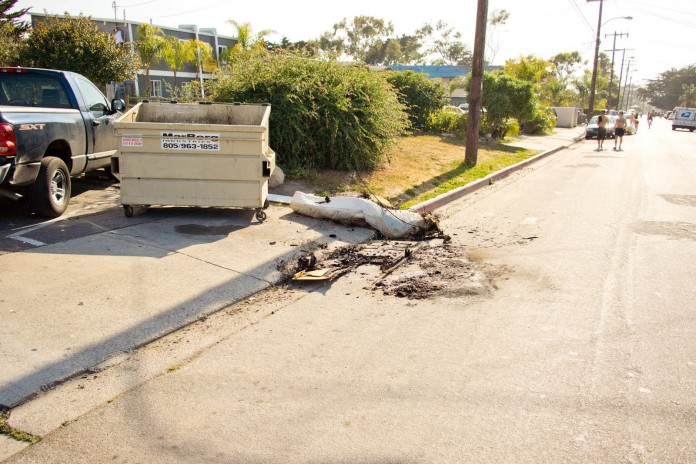 Violence broke out in Isla Vista on Trigo Road Friday, April 26, following one student directing homophobic comments toward another, reminding the campus community of the importance of creating a safe climate in and around campus.

Aljawad explained that the altercation began when a man she described as “white, cis-gendered, and non-queer” began directing homophobic comments and slurs towards a friend of hers, a queer man of color, and telling them to “get off of his street.” The man also made derogatory comments toward the women of the group.

Aljawad, Bitar, and friends continued down the street in an effort to avoid the individual, but he pursued, persisting in shouting comments in slurs and stepping in to “get in the faces” of members of their group, said Bitar. The violence began when one of the students being provoked took a swing at the student who was making comments.

In the ensuing altercation, the student who threw the first punch was knocked unconscious and the student who had made the homophobic comments began “kicking his head repeatedly and started stomping on him,” said Aljawad. “I just wanted him to not kill the guy, so we called the cops.”

The individual who had been using slurs fled after he realized the cops had been called. When the police arrived, Bitar said they were unresponsive to their concerns.

“I went up to him to try and tell him about the comments the guy was making, he didn’t even write it down, he didn’t seem to think it was relevant. I felt like we weren’t being taken seriously,” said Aljawad. “We tried to tell him it was a hate crime and a provoked attack and he started talking to the friend of the guy [who had been making homophobic comments] instead, he was a white male talking to another white male.”

Aljawad also spoke further about the issues of police responsiveness to people of color and the queer community.

“Whenever you talk about an emergency, what to do in this kind of situation, they tell you to call the cops, but that doesn’t really take into account certain communities,” said Aljawad. “That’s not a group that keeps us safe, it’s obvious that cops prefer to protect certain communities over those like people of color and the queer community. It just gets more complicated in situations like this, just because someone being threatened threw the first punch doesn’t mean it’s not a hate crime.”

“From my personal experience and from a lot of discussion with queer students at [the University of California, Santa Barbara], our campus does feel like a fairly safe place…IV is completely different as I have experienced many hate crimes in IV just in the last two years I have attended this school. For myself and many others who have been the victim of hate crimes in IV and for many fearful queer students this has changed the way we live our lives,” said Thomsen. “[Isla Vista Foot Patrol] seems to value what non-queer white men say over just about anyone else and non-queer white men also happen to perpetrate a majority of hate crimes in IV.”

Peterson Pham, a fourth-year sociology major, and internal coordinator for AS Queer Commission, also expressed concerns about safety of the queer community in IV.

“As a queer genderfluid person of color, I do not feel safe anywhere,” said Pham. “I try to avoid law enforcement as much as possible because I feel that they are not here to serve me.”

Both QCom officers also spoke about the continuing efforts and importance of working on the issues of homophobia in IV.

“Any discussion about issues affecting my community’s safety should not ever be questioned in its authenticity nor its importance,” said Pham. “There needs to be a push from beyond the people within my communities to provide a safer climate…Everyone needs be doing their part to make everyone feel safe and to continue this dialogue.”