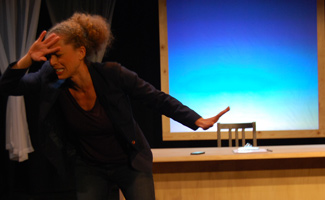 The personal is very much the political, as actress-playwright Fanshen Cox DiGiovanni illustrated through her solo show “One Drop of Love: A Daughter’s Search for her Father’s Racial Approval.” The show was performed at the University of California, Santa Barbara’s Multicultural Center on May 7.

First formulated as a Master of Fine Arts (MFA) thesis project, “One Drop of Love” began as Cox DiGiovanni’s personal attempt to revive her estranged relationship with her Jamaica-born father, who failed to show up at her wedding years before.

What ensued was a powerful multimedia, one-woman play laced with wit, warmth, and depth that fused her fragmented experiences with racial and cultural dispossession into a coherent narrative. The multidimensional show traversed back into the years of Cox DiGiovanni’s family history to untangle the weight of the socio-political events that have inevitably contributed to a crucial part of her identity and self-perceptions today.

Part of the beauty of Cox DiGiovanni’s play was the way in which she refused to pigeonhole any particular attitude or phenomenon into a specific binary or category, which produced an arresting quality of ambivalence that refused to define or limit conversation.

An issue that she continually grappled with was the extent to which her personal and conversational experiences should be racially-charged. The simple act of marrying a dashing Italian man was one fraught with a multitude of unspeakable dilemmas, for she was inexplicably worried about what her Jamaican father might think of her marrying a European.

In a cuttingly satirical and memorable sequence, Cox DiGiovanni played out her “daymare” of her wedding ceremony in Jamaica, where she imagined herself walking down the aisle as Thomas Jefferson’s slave daughter with her husband in tow, pompously dressed in a British imperialist uniform. As a carefully put-together multimedia sequence at the end of the show revealed, however, her father’s reason for skipping her wedding was not the issue of post-colonial rage against the slave-owning Europeans, but rather his own ambivalence about returning back to Jamaica.

Cox DiGiovanni slipped in and out of multiple roles with dexterity, first imperiously bearing down at the audience as an anonymous U.S. Census Bureau officer, and then staggering affectionately across the stage with a lilting accent as her grandmother, revealing through her impressions the fluid and ultimately arbitrary nature of identity labels.

Her personal trajectory of “placelessness”—not seeing herself as “black” enough to join the Black Students Union, and yet having candy vendors in Cape Verde, West Africa, come up to her (while on a pilgrimage of sorts to trace back her African roots and understand her father’s pan-African attitudes) to ask her why she was so “white”—was interspersed with scenes that traced the evolution of the practice of racial categorization by the U.S. Census Bureau. The contrast brought to the forefront her sense of frustration from continually being racially defined by others, and the puzzling practice of placing someone in the category of “black” as long as they possessed even “one drop” of Negro blood—hence the play’s title.

At the post-show dialogue with UCSB’s professor of sociology G. Reginald Daniel, Cox DiGiovanni reiterated the importance of engaging in “scary conversations about race and racism,” reflecting that her work producing and performing “One Drop of Love” completely transformed the nature of her family relations after their involvement in her show.

Cox DiGiovanni will perform “One Drop of Love” again at California State University, Los Angeles on May 22, and at the Hollywood Fringe Festival in June.