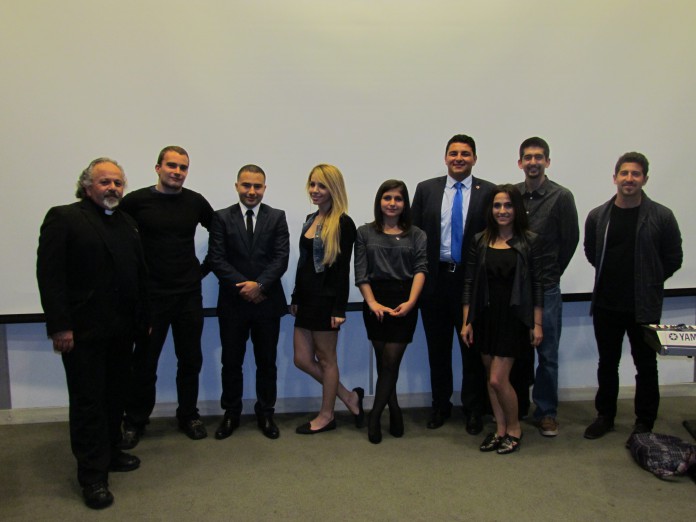 A genocide remembrance march, candlelit memorial, and commemoration composed the 98th Annual Armenian Genocide Commemoration, held Thursday, April 25, at the University of California, Santa Barbara. The event was held to cast light on the 1.5 million Armenian lives lost during the first World War. Numerous students from a diverse set of backgrounds joined the Armenian Student Association in an event that resonated the atrocities inflicted upon the Armenian population on part of the Ottoman Empire, today known as the Republic of Turkey.

“In 1915, under the auspices of the Ottoman Empire, a declaration was made to wipe out every Armenian man, woman, and child living in Anatolia,” said fourth-year political science major and ASA President, Adam Jaratanian. “Over 1.5 million Armenians were killed in a systematic fashion.”

The Armenian Genocide of 1915 is considered to be the first genocide of the 20th century. Recognition of the Armenian Genocide has suffered denial by not only the Turkish government, but also on the part of the United States government, with whom they have political ties. To put this into perspective, 20 other major countries and 43 U.S. states affirm that this incidence is truly a genocide.

“Every Armenian [is affected] by the genocide. My great grandparents were forced to march through the largest Armenian graveyard: the Syrian desert,” said a UCSB political science alumni Joseph Kazazian. “My great-grandfather was left for death, but was the only survivor in a family of 38 people.”

ASA’s commemoration this year highlighted how Armenians have risen from the ashes with a plethora of positive accomplishments in society. For example, Dr. Raymond Damadian has saved thousands of lives since his creation of the magnetic resonance imaging (MRI) machine, Hovannes Adamian was the inventor of the color television, and Aram Chobanian was the Dean of Boston University’s School of Medicine.

“I am part of the Armenian diaspora that, despite our circumstances, is prospering. I am here to not only defend the rights of my fellow Armenians, but of human rights in general,” said Michelle Menechyan, a first-year student double majoring in political science and philosophy. “I refuse to stand passively while genocide still exists in this world.”

ASA, as well as Armenians worldwide, continually attempt to give prominence to the genocide. The genocide march, candlelight memorial, and the commemoration accentuate recognition and awareness to never forget the monstrosity of the Ottoman Empire.

“When you hear about Armenians you hear about them divided. Our right as a people to be one was taken away from us by force,” said first-year psychology major, Lucina Asatryan. “We fight not to let the horrible acts that the Ottoman Empire inflicted upon our people, massacring 1.5 million Armenians, weaken us exactly in the way the Turks had intended when they decided to annihilate us.”

Armenians today are stronger than they once were. They are still a minority, composed of about 9 million people, but together as one, they urge people to recognize the Armenian massacre as a genocide and to never forget the horrendous ways in which the Turks persecuted their peoples.

“Armenians don’t have anything against the Turkish people of today,” said Jaratanian. “We want [the Turkish government] to recognize what the Ottoman Empire did. We are simply against those that say a genocide never occurred.”