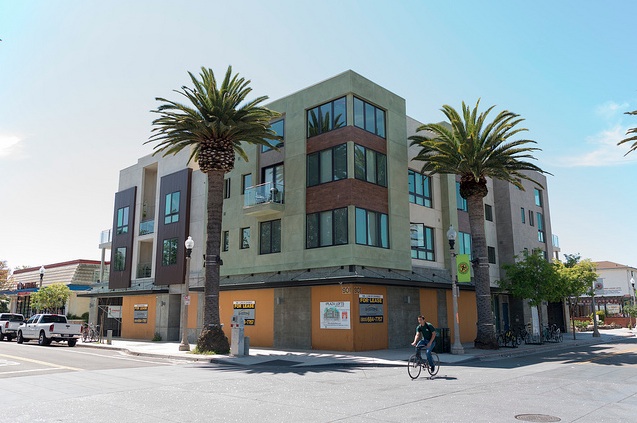 Isla Vista. An un-incorporated city of late night partying. A paradise composed of some of the most intelligent students in the state, perhaps the country. Each student is united together by a general love of the beach and an understanding that their intellectual pursuits don’t necessarily demand the absence of drunken entertainment and scandalous endeavors.

For many students, Freebirds is a midnight munchie normality. Silvergreens is where you go when you’re feeling guilty about eating Freebirds. Everyone has their favorite coffee shop and pizza place, and adding The Habit to the IV scenery was just another reason to never have to venture into Goleta.

But the landscape has not always been this way. Where the University of California, Santa Barbara campus now is, there used to be an American marine base during World War II. Embarcadero Hall stands on the ashes of the Bank of America, burned to the ground on Feb. 25, 1970, by students protesting a series of incidents between African-American students and law enforcement as well as the election of Richard Nixon.

Isla Vista has changed. In recent times, the Loop and Campus 880 have taken over in IV, bringing new homes and looks to the community. For an incoming batch of freshman this coming fall, the Loop will always have been there. The Habit will be an obvious place to get lunch and Crushcakes to get dessert.

Tom Leu is the owner of IV Drip and said that while he understands why companies are eager to move to IV, they have to add something unique to the area. IV Drip, known for its cookie-wiches and homemade cookies, has been an IV regular for nearly 10 years.

“I don’t know that it’s going to be that great for somebody that’s put in a lot of money, like Pizza My Heart, when there are already so many pizza places in town and a new pizza place is going in down the way here,” Leu said. “There are more businesses than the 20,000-student population can afford, especially when so many times during the year, there’s a weekend when half the kids go home.”

Adjusting to students’ schedules is a real issue for businesses looking to enter IV. Generally bustling with almost 22,000 students, IV feels like a ghost town when the summer begins and most students leave IV. Leu explained that one company tried to compete with IV Drip, and the university schedule had such a detrimental effect on the business that it left.

Some people in Associated Students are concerned that a general gentrification is occurring in IV as the more home-grown shops and even apartment complexes are being taken over by larger businesses that are operating outside of a student’s budget. Recently elected External Vice President of Local Affairs Alex Moore expanded on his views of IV gentrification during the pre-election EVPLA debates.

“Gentrification really is a problem in Isla Vista,” Moore said, “and part of the way I think we need to manage it is by reevaluating the Isla Vista Master Plan.”

The IV Master Plan is a layout and construction strategy that was begun in 1999 by Santa Barbara County, UCSB, and the IV Recreation and Parks District. According to the SB County Comprehensive Planning Division, it aims to combat issues of “limited parking, overcrowded and substandard housing, and deteriorating infrastructure,” in the IV community. The plan addresses an issue that arose during the 1960s building boom in IV when the SB County Board of Supervisors allowed IV to be re-labeled as student residential zoning, allowing homes to be closer to the bluffs and increasing the number of rooms a complex could have per parking spot.

Moore said reevaluating the impact this new infrastructure has on the IV community is an important part of addressing this issue, saying, “Making sure that something that was made in 2000, [or] 2007, isn’t hurting our community right now. It’s important that we clean up Isla Vista and make it more environmentally sound, but it’s also important the Isla Vista stays affordable and diverse.”

The newer buildings being constructed in IV do tend to be both more environmentally efficient and more expensive than older buildings. A Loop employee explained that different colored LED lighting throughout the complex is energy efficient and aesthetically pleasing.

However, with each bed costing $850 or more, IV Community Relations Committee chair and AS Off-Campus Senator Kaitlyn Christianson worries that they’re overestimating the financial situations of most UCSB students.

“This is another example of how people are taking advantage of students and our situation of living in IV,” Christianson said. “They raise these prices because they know they can keep pushing us and pushing us, but soon we’re going to break.”

Despite these concerns, the new businesses say they’re enjoying the IV atmosphere and are seeing a positive response from students. Matthew Broad, a Pizza My Heart employee, said that he’s enjoyed working for the company.

“I’d say that it’s been great here,” Broad said. “It’s been a really positive experience and people enjoy the pizza and we enjoy serving them.”

The effect of all these new businesses has yet to be seen, but with the construction of Campus 880 on Camino Del Sur and more construction going on behind local coffee shop Caje, it’s expected that more big businesses will be moving in.

“If we don’t change,” Leu said, “we’re going to lose. You just can’t keep doing the same thing when the competition keeps swarming.”