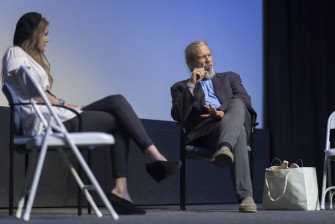 Isla Vista was recently graced with the presence of Jeff Bridges, an Academy Award winning actor famous for his appearances in “The Last Picture Show,” “Tron,” “The Big Lebowski” (where his role as protagonist “The Dude” earned him his perennial nickname), “Iron Man,” “Crazy Heart” (for which he won the Oscar for Best Actor), and “True Grit,” among many others.

His appearance was part of a “Tron-A-Thon” hosted by the Magic Lantern program this Monday at the IV Theater. The event featured showings of both “Tron” and “Tron: Legacy” (both of which he stars in) preceded by a Q&A session with the legendary actor.

The students who attended the event were rewarded with one of the most lively and comical interviews in recent memory. The Dude fielded questions from the audience about a wide range of topics, including his lesser-known movies such as “The Amateurs,” his music career with his band Jeff Bridges and the Abiders, and the methods that were used to produce the special effects in the original “Tron.” The audience ate up every word, and it was clear that Bridges was speaking to some of his most loyal fans. Some audience members even brought up the 1958 TV series “Sea Hunt,” his first acting role, which starred his father Lloyd and included guest spots by his brother Beau as well.

Aside from answering questions from fans, Bridges’ appearance was motivated by his desire to spread the word about his latest philanthropy with the organization Share Our Strength. This humanitarian organization is focused on ending child hunger in the United States, and their newest campaign, “No Kid Hungry,” seeks to provide summer meals for children who are dependent on being fed by school meals throughout the year. Bridges has served as the national spokesperson for the organization and has been actively participating in events around the country.

Before the general Q&A, I was able to snag a quick personal interview with Bridges as fans swarmed him and ask if he has any projects coming up that he is excited for.

“I’ve got two ‘in the can,’ as they say,” Bridges explained. “The first one is a movie called ‘R.I.P.D,’ and you can find a trailer for that on my website. There’s also another one called ‘Seventh Son.’” “R.I.P.D.” features Bridges and Ryan Reynolds portraying undead police officers, while “The Seventh Son” is a fantasy film in which he stars alongside Julianne Moore.

Bridges also had a bit to say about his music career.

“I’ve been focusing on my music a lot more lately. We actually have a show coming up at SLO Brew, and my daughter Jessie is going to be opening for me.”

For anyone interested, the show is on Aug. 23 in San Luis Obispo. The Dude finished his interview with a message from Share Our Strength, noting that it is his “main focus” as of right now.

Between the event staff that was rushing him into the theater for his interview and the crowd of fans begging for pictures, that was, unfortunately, all I was able to personally ask Bridges. However, be sure to look out for more Magic Lantern screenings at IV Theater every Friday and Monday. As a select few lucky students learned this week, you never know who might show up.