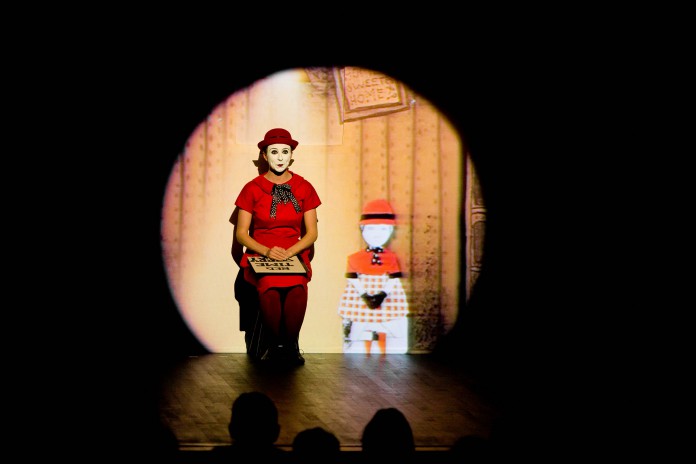 The squalid slum tenement of the Bayou Mansions on Red Herring Street sits on the fringes of a gleaming metropolis in the vein of Fritz Lang. While the skyscrapers splutter with Art Deco colors, Bayou is overrun with nothing but cockroach infestations. Here, its juvenile inhabitants run amok on the streets in protest, the impossibly lonely caretaker bats flies as he dreams of buying a one-way ticket out of his grime-filled life, and its newest resident Agnes Eaves attempts to fix the children’s problems through her art and collage projects. Meanwhile, the City Mayor hatches a plan to suppress the children’s revolution by means of a sinister ice-cream van and Granny’s gumdrops.

Enter the entrancingly dystopian universe of theatre company 1927’s “The Animals and Children Took to the Streets,” a subversive fairytale-gone-wrong that delights with its exquisite performance style and strongly executed storyline.

As a performance theatre company formed by a collective of artists (animators, writers, theater artists, film-makers and composers) in 2006, 1927 has carved out a name for itself through its creative use of technical stage elements and incorporation of media in its original shows, especially since the debut of the widely-acclaimed “The Animals and Children Took to the Streets,” which performed before a full house at University of California, Santa Barbara’s Campbell Hall on April 25. The event was put on by UCSB’s Arts & Lectures.

Most of the joy in watching the hypnotic, macabre, and yet hilariously satirical quality of the 70-minute production unfold before your eyes stems from the sheer imaginative quality of its execution. Ever had a desire to transport yourself into the narrative of a graphic novel or television animation series, and launch into a song from a Gothic musical backed by a haunting live piano score? It seems impossible to combine so many different genres and strains of influence (think Tim Burton, Charles Dickens, Roald Dahl, and more) into one cohesive performance, yet “The Animals and Children Took to the Streets” manages to accomplish that feat with grace and punch.

Keeping to the relatively short time frame of 70 minutes was a wise choice. While both the performance and storyline were tied to each other well, the plot lacked a strong narrative pull that carries the audience’s interest past the one-hour mark, once the shine of the ingenious theatrical wizardry wears off.

Three actors, some projection panels on the stage, and Paul Barritt’s dazzling animations allowed for multiple unexpectedly creative moments in the show: a neighbor swatted away at cartoon “Zs” emanating from an animated sleeping child; characters appeared to dash past countless landscapes while merely jogging on the spot; and the caretaker lead us into his dream-world as he dozed on his projected bed while actually standing upright on the stage.

Especially memorable was a spontaneously interactive moment towards the end of the play, when the caretaker engaged in a session of mild meta-play by pacing back and forth between road signs cryptically labeled “Idealist Ending” and “Realist Ending,” with the optimists and pessimists in the audience raucously rooting for separate desired outcomes.

Sticking to its characteristically droll, deadpan manner, the play settled on the triumph of the “Realist Ending” in the end. It was an oddly prophetic move, considering that the play’s premiere in late 2010 and its playfully-addressed themes of class marginalization and social disparity would later coincide with the violent riots that erupted across major cities in England, particularly boroughs in East London, in the summer of 2011.