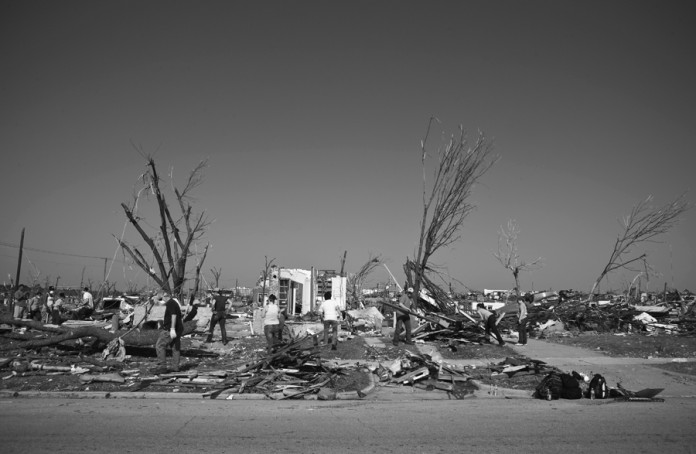 A massive tornado devastated Moore, Okla., on May 20, leveling a large portion of the city and leaving many wounded and several dead in its wake.

“Teams are still evaluating the destruction…So far, they’ve found that the tornado’s width spanned 1.3 miles—the length of more than 22 football fields lined up end-to-end,” said the CNN correspondents. Amidst the 17-mile-long and 1.3-mile-wide path that the tornado ravaged were Oklahoma City suburbs, including Moore Medical Center, Briarwood Elementary, and Plaza Towers Elementary.

The medical center “has been devastated,” said Moore Mayor Glenn Lewis to CNN. “We had a two-story hospital; now we have a one. And it’s not occupiable.”

“Briarwood Elementary was damaged, but everyone made it out alive,” said CNN. Plaza Towers Elementary, on the other hand, was leveled down to a few walls as the tornado took the lives of several people, including children.

Although the death toll was initially reported to be approximately 50 people, “it appeared some of the dead were counted twice,” said Amy Elliot, chief administrative officer for the Oklahoma Office of the Chief Medical Examiner, to CNN.

“The official death toll from the storm remains at 24—a figure that could still change,” said Mark Memmott of NPR, and as of 8:15 a.m. on May 22, 324 people have been injured, Oklahoma Governor Mary Fallin tweeted.

“The 24 people who were killed included 10 children, according to a statement sent to reporters by the office of Oklahoma Gov. Mary Fallin,” Memmott said to CNN. Heartbreakingly, “The ages of those killed range from 4 months to 65 years.”

The destruction has subsided and, while search and rescue is ongoing to ensure that no one has been left behind, Moore, Oklahoma has shifted into recovering.

“We are beginning the recovery operations,” said Fallin. “You see a lot of utility crews that are out here. There’s a lot of construction trucks. You’re seeing people walking down the street pulling some wagons, going back into their homes to get their prized possessions,” she said.

“A few miles west of the worst of the devastation, the Red Cross Shelter inside St. Andrews United Methodist Church was starting to see a slow but steady stream of victims who lost everything,” said NPR’s Kirk Siegler. “With so many people displaced by the tornado, Red Cross officials are preparing to keep these shelters open for weeks. There’s plenty of room for more people here at St. Andrews, which is well stocked. Donations have also been pouring in to others nearby,” he said.

Emotional recovery is also being facilitated.

“A lot of people in this district will need grief counseling, including myself,” said Susan Pierce, the superintendent of public schools in Moore, Okla., to CNN In addition to firefighters and police officers, the employees of the devastated schools are “the greatest heroes I know today,” said Pierce.

Pierce was part of a Wednesday meeting for teachers at Southern Hills Baptist Church in Oklahoma City in which they gathered, shared information, and comforted each other.

“Teachers were clearly ready to celebrate moments of bravery, the stories retold of their colleagues draping their own bodies over children, singing to them, and holding their hands,” said Alan Greenblatt of NPR.

President Obama, who plans to visit Moore on Sunday, said to CNN, “While the road ahead will be long, their country will be with them every single step of the way. That’s who we are, and that’s how we treat our family and friends and our neighbors wherever they are in the country.”

In addition, discussions have ensued on how to prevent the loss of life in future tornados.

Leslie Chapman-Henderson, president and CEO of the Federal Alliance for Safe Homes, said to CNN, “Monday’s disaster is expected to lead to renewed calls to ensure that new houses are equipped with some sort of protection.”

Hopefully, future lives will be saved by analyzing the destruction that this tornado caused and thereby implementing any necessary precautions learned from this tragedy.