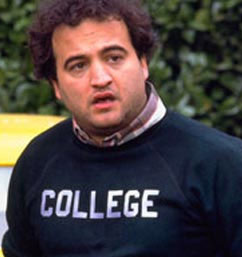 So bear with me for a moment while I tell you a story: this one time, I was sitting in class, and this older woman walks into the room. It is the first day of the quarter, and having never seen the professor before, I assume that she is the professor. Instead, she walks over to where I’m sitting and plops herself down into the seat one over from mine. I smile and nod at her, assuming that she is just sitting there until she is prepared to start class. A few moments later, another older woman walks into the room and sets up shop in the front of the classroom, and is flanked by her army of TAs. Well, okay then.

Fresh out of high school, it was hard for me to adjust to the fact that many of the people on campus were not just older than me, but a lot older than me. I was living in a world where students were grouped by age rather than ability, and there was never more than a one year difference between classmates. Suddenly, I was in a world where people the age of the average undergraduates could be TAs, and where people the age of professors could be undergraduates, even though those people do not number many on our campus.

Actually, let’s break it down. According to the UCSB Budget and Planning Campus Profile for 2012-2013, students aged 30 and over make up less than 1 percent of the undergraduates, and they make up 28 percent of graduates. Graduate students only make up 13.4 percent of the entire campus population. There are fewer graduate students altogether than in the freshman class. So this population is a rather small one, yet their smallness makes their presence on campus the more noticeable.

UCSB is a university that prides itself on its dedication to undergraduate students because our graduate programs are very small. So when I came here, I was expecting the population that we see in every college movie: all the young’uns getting wild on Del Playa every weekend. Of course, the vast majority of the students on this campus are young, with the average age of undergraduates being 20, and the average age of graduate students being 29. Yet, I was a little hesitant about the older folk on campus and in my classes. Narrow-minded as I was coming out of high school, it was weird to me. It felt like going to school with my mom.

But then I realized, my mother went back to school to get her master’s degree when I was in the ninth grade. She had two kids, was already working as a teacher’s aide in a middle school special education program, but decided that she was ready to take on the more serious role of being a certified teacher. She already had an undergraduate degree, but wanted to get another degree. She was going to make something of herself on her own terms.

Would I feel weird if my mother was in one of my classes? Probably, because she’s my mother. But I would have nothing but the utmost respect for her for going back to school—as I do already—for taking her fate into her own hands, for refusing to accept her life as it was, and for constantly striving to improve and change herself.

When I see older students, I think about how great it is that they are going to school. They have an incredible wealth of information about the real world. I’ve had a history TA who decided to come back to school and get a PhD after her youngest son went off to college, and was in fact older than my professor.

Older students shouldn’t be an anomaly, and even if they are, we certainly shouldn’t treat them as such. It’s sometimes hard to relate to them on a personal level, because they are at a different place in their lives than us. It’s easy to isolate them, to ignore them and hang out with people our own age. I’ve also heard of students putting down older students, saying that they weren’t good enough to get into university when they were young. That cuts me to the core; even if that were true, older students should be given even more respect for working hard to make it. That drive and determination is sometimes what sets them apart from us.

Yes, it can seem odd to see older students toting backpacks around campus, riding their bikes next to you, and raising their hands in lecture. But rather than ignore, or point and laugh, we should listen all the more closely.