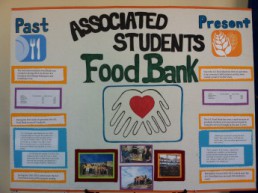 As many alumni returned to their beloved University of California, Santa Barbara campus for the All Gaucho Reunion Weekend, the Associated Students Food Bank sponsored a luncheon, “Back to the Foodture,” to celebrate their second year relieving hunger for struggling students.

Current and former students came together on the bright Sunday afternoon of April 28 to meet the inspiring organizers of the Food Bank, learn from and thoroughly enjoy the interactive food demonstrations, and contribute to the honorable cause of ending hunger. The event served not only as an inventive way to fundraise for the future but also as a thank you to the generous donors and hardworking AS members.

The AS Food Bank was inspired after a campus-wide survey revealed the real and prevalent problem of student hunger.

“The survey confirmed the fact that students on a regular basis were going hungry and not having access to the resources they needed to sustain themselves as students in a university like Santa Barbara,” said Paul Monge-Rodriguez, UCSB’s 2010-2011 AS President. He expressed his deep concern for this issue and emphasized the necessity for this program on campus.

Full-time college students’ primary concerns should be studying, but unfortunately, this is not completely realistic for some students. Hunger happens for many reasons; some can only afford the meal plan with 10 meals a week, some are in between pay checks or waiting on a Cal Grant that arrived late at the beginning of the quarter, and some can’t make room for a job with their demanding school schedule.

“A big thing in the interest of forming it was making sure that the space was centrally located but also that it upheld confidentiality,” said Rodriguez. “Being hungry is not something people want to publicize.”

Regardless of the reason, hunger is a regrettable problem for many dedicated students, and the members of the Food Bank have dedicated their time and effort to eliminate it. Since its creation, they have achieved remarkable success that this event recognized and celebrated. Erick Lankey, committee chair of the Food Bank, commented on the accomplishments and momentum that they plan to continue and amplify in the future.

The members of the AS Food Bank are confident but not complacent. They know how successful this has been and will become, but they also know that there is a large portion of the student population that they can still reach out to. Hunger should not be an issue in our already-stressful lives, and the Food Bank attempts to eradicate that, at least at UCSB.

The AS Food Bank is open on Monday, Wednesday, and Thursday from 9 a.m. to 6 p.m. to provide supplemental groceries, non-perishable goods, and toiletries to students who may be struggling to bring food to the table for a variety of reasons. It is a common place for those with a common problem, and the potential for growth seems limitless.