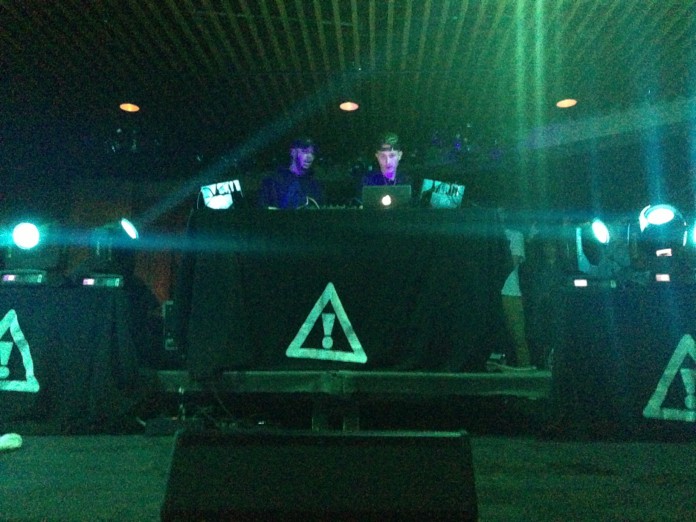 After seeing Baauer and Danny Brown perform on April 18 and spending a whirlwind weekend at Coachella only a few days prior, where I exhausted a good chunk of my energy and disposable income, going to the Flosstradamus concert at the University of  California, Santa Barbara Hub on April 22 may not have been the best thing for my eardrums. But given the epic performance that Flosstradamus put on, which featured all of their hottest mixes and proved why they are so well-known in the EDM scene, I have no regrets.

“Santa Barbara!!! UCSB!!! Tonight!!! #TURNUP #UNDERGROUNDNIGHTS” tweeted the DJ duo, which is comprised of J2K (Josh Young) and Autobot (Curt Cameruci) sent out earlier that day to their Santa Barbara Twitter fans. Fans did no other but “turn up,” forming a sea of baseball caps in the Hub that bobbed madly in time with the music. Showing off their patented emergency symbol logo on their equipment, the duo commanded the audience to “turn this into a house party.” If this had been an actual house party, the house would have been trashed and the cops would have been at the door within a few minutes.

The duo, known for their hard flowing “trap” sets, delivered a set that was both classic and idiosyncratic, dropping popular trap tracks as well as some unexpected remixes. Major Lazer fan-favorites like “Original Don” and “Express Yourself” hyped up the audience, as well as a trap remix of Jay-Z and Kanye West’s “Niggas in Paris” and classics like Alice Deejay’s immortal “Better Off Alone.”

The rest of the set was a bevy of trap classics from Rick Ross, Waka Flocka, and Chief Keef, to name a few. A highlight of the night was definitely when they dropped RL Grimes’ remix of “Satisfaction” by Benny Benassi, and then delved right into a mix of Kanye West’s “Mercy” with the classic techno song “Sandstorm,” by Darude. They also played Lana Del Rey’s “Videogames” and their recent Fool’s Gold release, “Piss Test,” during a short encore while the crowd shouted along with their middle fingers in the air.

It was a great night for trap music and EDM fans, and an incredible performance by the talented trap duo that has performed at events like Ultra Music Festival, Coachella, and Lollapalooza. They ended the night with a tweet, which stated, “UCSB… WE GIVIN OUT RATCHET SCHOLARSHIPS TONIGHT ?#TWERK4EDUCATION ?#FULLRIDE.” Given the reaction of the audience to Flosstradamus’ show, I’m pretty sure everyone obtained that scholarship by the end of the night.