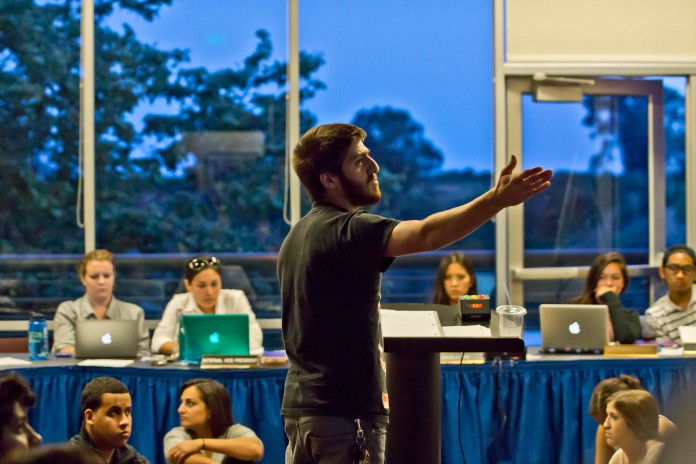 After approximately five hours of public forum and discussion the Associated Students resolution, “A Resolution to Divest from Companies that Profit from the Military Occupation of Palestine” failed early in the morning on Thursday, May 9, in a contentious vote that required a majority of 50 percent plus 1.

The resolution, authored by University of California, Santa Barbara AS Sens. Miya Sommers and Genesis Herrera, was revised twice after an early resolution of similar nature entitled “A Resolution to Divest from Companies that Profit from Apartheid” failed during the second week of spring quarter, and a resolution under the same name was taken off the agenda on Wednesday, May 1, in a vote of 8-7.

The contentious aspect of the vote did not come from the way in which people were voting, but rather from which way the vote leaned. There were 24 senators and proxies voting, so normally it would need 13 favoring votes to pass.

However, according to AS Legal Code, abstentions are not counted in the total number of voters, so the vote was out of 23. Fifty percent of 23, 11.5, plus one is 12.5. Because 12.5 is not a whole number, and there cannot be partial votes, it was up to Internal Vice President Mayra Segovia, who does not partake in voting except in cases of a tie, to figure out whether to round 12.5 up to 13 or down to 12, and whichever she decided was the number of votes in favor the resolution needed to pass.

“Like I said initially, I would’ve rounded up, and it wasn’t until I felt that people were lobbying or telling me differently that I would think to change my decision,” said Segovia. “I’m sorry for anyone that this has hurt, but it would’ve needed 13 yesses but that’s not what happened. So I’m sorry, and it fails and that is my final interpretation, and I hope that you all still can see us as students.”

Prior to her final decision was an aspect of the discussion that made it more questionable: Sen. Lauren Moissiy referenced the 8-7 vote which removed the resolution from the agenda last week. Since that was out of 15 votes, if they had been going by the same way of counting and rounding up, it would’ve required 9 votes (50 percent of 15 is 7.5; 7.5 rounded up is 8, plus 1 is 9), but instead Segovia rounded down and thus the motion passed.

“Seeing this [12-11-1] vote in front of me and not having done that [rounded up] to take it off the agenda, that was my fault, and I realize that,” said Segovia. “I make mistakes, people make mistakes.”

Segovia was forced to interpret how the vote turned out because the AS Legal Code was not clear in regard to what constitutes a majority in a case like that. Moissiy spoke about how she disagreed with the decision based on the confusion.

“I respect the fact that legal code is sometimes up to interpretation, because we’re all human and we make mistakes sometimes in how we write things in not making things clear,” said Moissiy. “Personally, I would’ve made an objection at the time, but it got kind of crazy in terms of where we were and it was very emotional. I don’t know if it’s still open to possibly objecting to the position but I just wanted to put that out there. And we should also change legal code; maybe someone can work on re-writing that.”

Despite a motion at the beginning of the meeting to only allow one representative from each side of the resolution to speak before moving into discussion, which many considered to be silencing student voices, nobody spoke afterward about the Senate’s decision made regarding the resolution, which could have stemmed from speeches made prior to Segovia’s decision by AS Executive Director Marisela Márquez, Associate Director for Community Affairs Aaron Jones, and AS President Sophia Armen.

“This is a time for leadership for all of us; this is a hard moment,” said Armen. “We have folks that are obviously very emotionally invested, but this is our moment to be a campus, to prove ourselves as UCSB students. No matter what people say about you, you have your dignity here, so let’s respect this. This is a moment where we define ourselves as people.”

The remainder of the meeting was spent discussing the budget for 2013-2014, but they decided to table it for a week to allow for Board, Committee or Commissions (BCCs) to speak to Senate and have all the senators there. The budget should be finalized Wednesday, May 15, but if it is not, the president’s budget will be the default and final budget for next year.