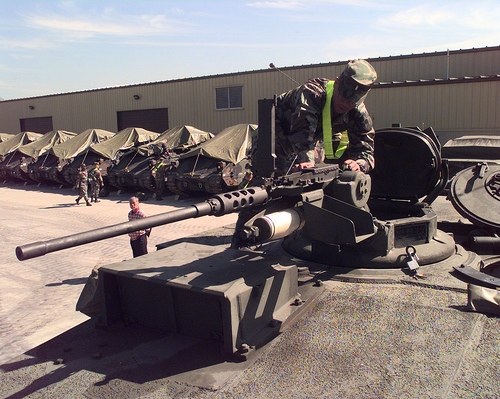 As Congress continues to cut more than $40 billion from the federal budget, several congressmen are pushing for a costly upgrade to the Army’s tank arsenal that the military says it doesn’t need. Conservative deficit hawks such as Sen. Rob Portman (R-Ohio) and Rep. Jim Jordan (R-Ohio) are calling on Congress to approve $436 million in upgrades to the Abrams A1 tank currently in service in Afghanistan.

But in an interview with the Associated Press, U.S. Army chief of staff Ray Odierno said the military didn’t see the tank improvements as an immediate necessity.

“If we had our choice, we would use that money in a different way,” Odierno said.

Still, the congressmen insist that the tanks must be built for the sake of national security, and to secure jobs at the nation’s only tank factory in their home state of Ohio. The Abrams tank is only built at the Lima Army Tank Plant in Lima, Ohio, which opened in 1941 and is currently managed by private military contractor General Dynamics Land Systems. In 2011, the plant itself faced federal budget cuts, when Congress planned to save roughly $1 billion by closing the factory from 2013 to 2016.

Despite his recent support for the upgraded tanks, Rep. Jordan has been a vocal proponent of Congress’ recent sequestration of the federal budget. The automatic austerity measures slashed the budgets of federal programs such as the Food and Drug Administration, which predicts it will lose $209 million next year. Some of the most painful cuts have gone to the Federal Aviation Administration, which had planned on closing 149 air traffic control towers and laying off thousands of its 47,000 employees until Congress passed a bill that secured its funding late last week.

But the Lima tank facility is located in the northern region of Rep. Jordan’s fourth congressional district, a fact which the representative has said does not color his support for the new tanks. According to the Associated Press, although the plant is facing a reduction in demand from the military, the factory still produces Abrams tanks for allies of the United States such as Saudi Arabia and Egypt, which receive a total of nine tanks every month.

“The only thing that’s worse than cutting national defense is not having any scheduled cuts at all take place,” said Jordan in an interview with C-SPAN.

Sen. Portman has also advocate for reduced spending in the past couple of years, and even introduced the Dollar-for-Dollar Deficit Reduction Act earlier this year. The law would force the government to cut spending on every dollar used to increase the debt ceiling. But even before the current tank improvements, Portman had taken exception with cuts to Lima tank plant in his native Ohio. In July of last year, Portman sponsored a bill that gave General Dynamics $255 million to continue tank construction through 2014.

According to the Huffington Post, the military had planned to halt production of new tanks until 2017, when a new generation of the Abrams was to begin production. Nearly two-thirds of the Army’s 2,400 tanks currently in operation are already fitted with the proposed upgrades, which include faster microprocessors and new flat-panel color monitors. According to the Army, each new tank would cost an estimated $7.5 million.