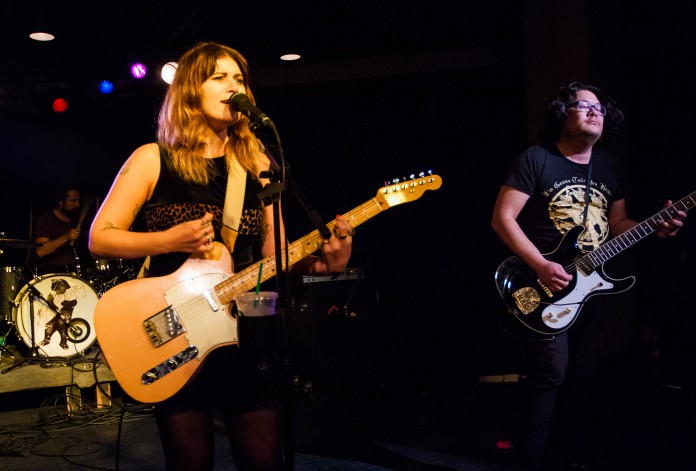 Girls clad in the latest styles from Urban Outfitters and boys sporting pompadours gathered at the University of California, Santa Barbara’s Hub on May 9 to vibe out with surf pop and indie-garage rock duo Best Coast.

Hailing from Los Angeles, Best Coast consists of Bethany Cosentino and Bobb Bruno. Cosentino is the lead vocalist, songwriter, and rhythm guitar player. Bobb Bruno, who has been described as the creative mastermind, plays the lead guitar, bass, and drums. Although regarded as a duo, Best Coast now tours with two more musicians, allowing Bruno to concentrate solely on the guitar rather than jump from instrument to instrument when on stage. Best Coast is noted for their upbeat, surf pop-rock sounds that are reminiscent of The Beach Boys; however, Best Coast dives into low-fidelity noise and garage rock sounds, with a splash of 60s R&B and soul. These distorted, upbeat sounds by Bruno complement Cosentino’s sunny but husky voice full of angst, producing music a heartbroken teenager can dance to.

The four-person boy band, Sun Daes, opened the show and set the mood for Best Coast with danceable indie pop and rock beats.

Best Coast performed songs from both of their studio albums, “Crazy for You,” released in 2010, and “The Only Place,” released in 2012. Their debut album takes us through what seems like a joyous union to an emotionally rough break up. It was ranked at number 36 on Billboard 200 and 39 on Pitchfork’s “Top 50 Albums of 2010,” garnering much fame and internet buzz for the duo. The second album has a tighter, cleaner dream pop sound, as it was a step back from the lo-fi noises that rendered Bruno as musically charming and dynamic. Content wise, Cosentino still displays that her heart is throbbing with want and loneliness, but she has slowly matured emotionally and lyrically.

Among the praise, Best Coast’s lyrical content caused controversy and backlash by many, who claim Cosentino’s lyrics about wanting her lover back (regardless of the way he treats her) are anti-feminist. At first, I too could not help but regard Cosentino’s songs and lyrics as desperate overall. Her second album showed more insight as to why she acts the way she does, but despite the growth in Cosentino’s libretto, I still found myself unable to fully embrace Best Coast because of its lyrical simplicity.

However, my initial bitterness and bias was dissolved the moment Cosentino’s lips touched the microphone. Through her reverb-drenched voice and chic stage presence, I no longer just heard her words, but felt them. Even if her emotions about the guy may raise an eyebrow, she means what she says, and she is not apologetic for being honest. She loved this man, and she is sharing her journey and realizations to the world, while rocking out on her guitar.

Other listeners appeared to share my sentiments. Couples slow danced to songs like “No One Like You,” holding each other tight, letting Bethany’s words of loss and love guide their feet. The pace quickened as Best Coast performed songs from their upcoming EP, such as “Who Have I Become,” which displays higher pitches and riffs from the electric guitar. Throughout the concert, the variety of style of music by Best Coast was represented by the movement of the crowd, as some couples slow danced, friends boogied, others rhythmically bobbed their heads, and some just stood and watched.

Cosentino later remarked, “I don’t know if I can’t see well, but there’s so many of you guys singing my lyrics and I don’t feel like many people do that. So thank you. That’s tight!” Cosentino seemed genuinely happy and humble, and her quirky sense of humor continued to show as she commented, “I just want to say what an honor it is to play inside a Panda Express,” referring to the restaurant across from the Hub stage.

Cosentino added, “If you know the lyrics to this song…it’s a new song…I’ll give you my first born child. It’s called ‘Fear my Identity.’” The song seemed to be a response to the media backlash and reclaimed her confidence as an individual.

Best Coast performed “Boyfriend,” and ended the night saying, “Thank you for coming out and singing along at the Panda Express.” The spirited crowd demanded an encore, shouting for one more song. After some time, it seemed as if “Boyfriend” really was the last song, and some of the crowd slowly dispersed and made their way toward the stairs; others continued to yell with hope. Right as I turned around to make my way out, Best Coast jumped back to the stage and performed “Summertime.” The crowd rushed back to continue the revelry, and folks in the beer garden even began banging on the countertop to the beat.

Despite the initial criticism and controversy about Best Coast, they’ve proved that their quick rise to fame was no accident. The well-dressed crowd left the Hub buzzing with approval and excitement, and I left being able to fully embrace and appreciate the beach vibes of Best Coast.